Sex and violence on the open seas: Apollonius Rhodius' Argonautica Books I and II

The first two books of Apollonius are replete with bizarre encounters and sudden extreme acts of violence, the visit to the isle of Lemnos, where the women folk have slain the entire male population, fierce hand to hand fights with outlandish six armed creatures, a freakish night battle in which the Argonauts slay their erstwhile hosts by mistake and a ring-side seat at a beach rumble ending in a nail-biting scene right out of the Fist of the North Star! Its vivid language adds to the excitement with the action carried along by liberal sprinklings of contracted and elided conjunctions.  I am referring to the fight between Amycus the bullying tyrant of the warlike tribe of the Bebryces and Polydeuces – the Rocky Balboa of his age. Here in Book II. 90-95, at the end of a long and drawn out punch drunk grapple with Polydeuces, Amycus meets his end. 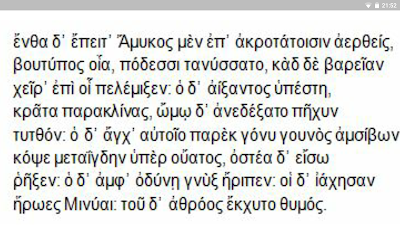 ‘And now Amycus, rising tiptoe like a man felling an ox, stretched up to his full height and brought his heavy fist down on the other. But Polydeuces dodged the blow by a turn of his head, taking the forearm on the edge of his shoulder. Then, closing warily, he landed him a lightning blow above the ear and smashed the bones inside. Amycus collapsed on his knees in Agony; the Minyan lords raised a shout of triumph; and in a moment the man was dead.’                             (From E.V.Rieu’s Translation)

E.V. Rieu’s spirited and pacy rendering is quite freewheeling and as a result tends to lose some of the verbal richness and echo play of the Iliad and Odyssey, the epic forerunners and inspirational source material for Apollonius. At the end of the excerpt above he renders the Homeric tinged phrasing of the original with a pretty bald ’then he died’ type of bathetic statement. The original quasi-epic Greek has him, ‘pouring out his spirit in a torrent’, vividly combining the loss of his soul and most of his life blood – and without the the ancient Greek we lose the impact of the grisly onomatopoeia of the death punch with the verb at the end of the descriptive phrase, ‘ ostea d’eisou..rexen’. The whole passage is full of the abbreviated chopped off connective/adversative particle  de (d’), giving the impression that the narrator can hardly get his words out due to the breathless excitement and the sheer speed of the action on front of his eyes. It could have come right out of 3rd Century BC sports commentary of a boxing match! To be fair to Rieu, he has followed the path of most modern translators who remove a lot of the conjunctions and particles that would be superfluous or even obstructive to rhythms of English, but in the ancient (faux-epic Alexandrine?) Greek makes so much of the atmosphere and provides vivid and exciting pacing devices, especially in action scenes like the beach rumble with Arch-thug Amycus.