Aristophanes Frogs - Not Croaking but Drowning

Xaire!
I have been gradually warming to the Frogs after a second or third reading after initial doubts as to whether it is still possible to laugh at comedy written in Ancient Greece almost 25 centuries ago – but to my great surprise/relief it is. There is clear evidence in the text a lot of the techniques that are so familiar to us in our own modern comedy of the modern era, the classic two-man, fall guy and sidekick combo of Dionysus and Xanthias his slave, mistaken and switching identity gags, slapstick or visual gags, so much that is the ancient precursor to so many a classic comedy routine so familiar to us.
All the above notwithstanding there still remains the issue of how much we are really getting, the missed nuances and allusions to the political and historical scene of the day. This is succinctly put by Malcolm Heath in the introduction to his article, ‘Political Comedy in Aristophanes’ Hypomnemata 87, Gottingen: Vandenhoeck & Ruprecht 1987 © Vandenhoeck & Ruprecht (1987) and Malcolm Heath (2007);
‘To understand Aristophanes’ plays therefore, we must ask about the reception with a view to which they were composed ; and this will inevitably raise in turn the question of political intent. 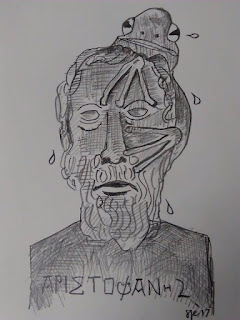 But this question, though inescapable, is extremely difficult to answer-and is so for readily intelligible reasons. It is not simply that we lack the intimate knowledge of the contemporary world which Aristophanes presupposed of his audience, so that many of the allusions pass us by or baffle us. Even where we can detect and explain an allusion, its tone or point may elude us. Irony, fantasy and playful distortion are parts of the artists’ repertoire, and they may present an almost insuperable interpretative barrier to ‘outsiders’, to those not antecedently familiar with the moods and intentions conventionally appropriate in a given comic genre. It would be an exaggeration to say that what seems to us prima facie plausible is probably for that very reason wrong; but it would be perfectly correct to insist that its seeming prima facie plausible to uninitiates like ourselves affords exceptionally weak grounds for supposing that it probably right.’
So it is clear that we will be missing a lot as modern audiences read through this play and have to tread carefully before making too many wild assumptions. But despite that it might still be possible to throw out a few conjectures as to the themes and ideas that bob to the surface of the Stygian swamps, much like the occasional croaking frogs head. One such conjecture has been that of scholarly inferences from the text of the play, (specifically lines 33-4, 190-91 and 693-694 with attendant scholia) of a grateful Athenian state rewarding the slaves who had rowed in the naval battle of Arginusae with citizenship.

The naval battle of Arginusae took place towards the end of the Peloponnesian War near the city of Canae in the Arginusae islands, east of Lesbos in 406 BCE and by the accounts offered by Xenephon [Hellenica:1.6.1-34] ad Diodorus Siculus [Library, 13.98-101] was a surprise victory but with heavy losses of life in an ensuing storm, lives which were considered could have been saved were it not for the incompetence or negligence of the eight Athenian generals assigned to the command of the fleet. Ian Worthington (University of New England, Armidale, Australia) in Hermes 117 Bd. H.3(1989) pp.359-363, describes the recent discussion and scholiast commentary on this point and concludes that too much reliance is laid upon scanty evidence (line 693-4 being the only direct allusion) for the dilemma to be resolved in any fully satisfactory way.
Let us proceed therefore and enjoy with caution! I think we should try to look at questions of how much an Old Comedy play Frogs is, what if any weight we should give to the idea of the Frogs as a political play, if at all, the purity of the texts as they have come down to us, in particular how much intervening directors and performers may have ‘improved’ the texts during their long history of transmission to the west, how much can we expect a modern performance of Frogs to deliver to us in the 21st Century, and anything else that springs to mind – however please don’t try to suggest any links whatsoever with Paul McCartney’s ‘controversial’ song the Frog Chorus.
I look forward to reading this late play of Aristophanes when we next meet.

Posted by Saibancho at 00:39 No comments: