Salve!
I am not sure to which circle of Hell I should be consigned for the crime of not getting  round to properly researching for the month’s blog and deciding to wing it; perhaps to buried up to the neck in warm termite infested soil with winged slugs crawling over me and licking the sweat from my tortured brow. I have managed to read Homer and Virgil and am just looking into the early cantos of Dante’s Inferno. Heaney I haven’t managed to get to so I will confine myself these three. 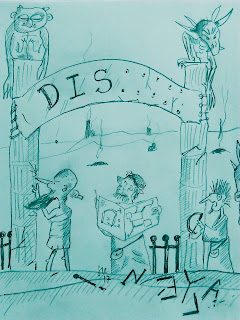 With Homer in Book XI we are presented with one of the earliest accounts of a visit to the Underworld in western European literature and at this point, the ground zero as it were, the foundations are distinctly pre-Christian and a dismal and depressing place rather than anything else. The structure of the underworld is loose and has a more sandbox vibe to use gamer speak – there are few walls or fences, one can wander at random and meet different grades of souls separated only by distance. There are some tortures going on but even they feel a tad lack lustre, a few wheels, some grapes dangling on a wire – it’s depressing but not particularly hair-raising. Hades is a gloomy place where souls hang out for a while, longing for even the most common of lives back on earth rather than their current dusty limbo. Homers depiction underlines the message of the Iliad, that ruin is the fate of all, and cannot be avoided and only those favoured by the gods can hope to pass their time here in relative peace and enjoyment, on the Elysian higher slopes for example. If the Western European Hell could be likened to a vast architectural structure or series of superimposed structures running back through time, with the Odyssey Book XI version we have the basic foundations, rope markers instead of walls, a loose and open underworld, as yet  relatively un-policed (at least on the inside)..A category D prison for the damned.
Virgil builds on the first detailed layers, not only physical but poetical and psychological on the basic ground plan given to him by Homer. The two poets are great in quite different ways, Homer, stark with his deeply ordered melody and rhythm, booming powerfully out over the hearth fire of the assembled Greek lords, creating a finger deep woodcut version of the afterlife, grim and obscure in its delineation. The Roman maestro skilfully adds mental terrors, dreams, phantasms, a richer vocabulary, bringing into play the full panoply of inherited tricks of the Alexandrian poets, playing like flickering tongues of fire through the fine golden mesh work of his masterful word play and contrasting light and shade.
The architecture/topography comes into sharper focus, gates of horn and ivory, broad battlements and fortified walls, rivers of fire, iron towers.  The Aeneid version is also a place of prophecy, prefigured by the Sybil as guide and adviser and by the long section towards the end where Anchises describes the future generations of lives to come, pre-ordered souls perhaps?! Augustus is amongst them, the Emperor under whose reign Virgil flourished and therefore had to or wanted to shoehorn some Imperial Family advertising space into his oeuvre. The prophetic aspects of Virgil’s vision would go on to inspire Dante to use that model and structure Paradise and even elements of Purgatory upon it.

Dante brings Virgil with him as his personal guide and fellow wayfarer in his underworld as homage to his great poetic mentor and designer of the earlier drafts. It is not often that an ancient poet lands a best supporting act in his own creation.
The Geography is based on clearly defined concentric circles moving in and downwards at the same time creating a much more claustrophobic effect – the sins of inversion made flesh. He takes the entire structure apart and rebuilds it so that the patterns of the architecture are at the same time recognisable and completely new. The castle and battle elements are there but so are many other fearsome environments described in even more vivid and remarkably outré detail. The psychological horrors as well as the graphic imagery have been ratcheted up even further. If Virgil is Sergio Leone, with Dante we are surely dealing with Quentin Tarantino. And of course the full complex of medieval Christian juridical categorisation is brought to bear throughout the completed grand edifice.
The cross fertilisation of ideas is also textual, too many examples to go into much detail here but I could leave you with a prominent one. There must be hundreds like this scattered throughout the trifold architecture of Hades and it gives you an inkling of the fascinating interplay of even the tiniest elements. It gives me the distinct impression of wandering through the many levels of a vast three dimensional visionary structure and from time to time tapping a tuning fork against the adamantine walls and hearing the same note or a distant harmonic of previous ages and poetical masters long-dead.
This example looks more closely at the very familiar Homeric topos of men being likened to leaves on the trees. We look to Dante first:

L’inferno Canto III. 112-114
‘As in the autumn-time the leaves fall off,
First one and the other,
Till the branch
Unto the earth surrenders all its spoils’

Most commentaries refer this back to Homer’s Iliad Bk.VI.l.146
‘Just like the generations of leaves, so are men;
Some leaves the wind scatters upon the ground and others
The budding wood produces
For they come again in the season of Spring.
So are the generations of men, as one springs up the other dies’


But surely they overlook the intricacy of the textuo-architectural structure and order which to my understanding is on an entirely different level of subtle inter-reaction. Note here in Virgil VI the intermediary architectural structural element, like a forgotten support strut, hidden deep in the inner walls of the Western Christian edifice of Hell:

I look forward to further ruminations on the trifold nature of Hell as well as my well-deserved chastisement, perhaps in the form of a Falernian vintage graced goblet?

Posted by Saibancho at 08:37 No comments: