Medea - Sympathy for the She-Devil? 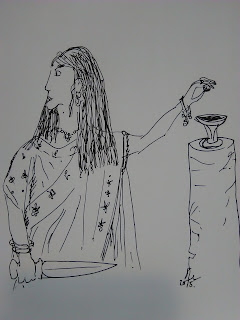 Euripides' play Medea was first presented at the city Dionysia in 431 as part of a customary set of four including Philoctetes, Dictys and the satyr play The Reapers and was awarded third prize. I have been reading the Loeb version of David Kovacs which as is to be expected with this series, respectable and workmanlike if a little flat upon occasion. It may not be entirely due to the translator who is often having to carve a reasonably straight path on varied and troubled waters, the least of his/her problems being corruptions or lacuna is the extant MSS. But I think that the play itself seems a very perfunctory affair, with its right on cue almost telegraphed moments, Medea wondering where she can go once Creon has announced her exile and Aegeus the aged king of Athens promptly entering by Eisodos A dressed in travellers garb, the NPCs, Nurse and Chorus Leader chivvying things along at an almost painting by numbers pace. The only exceptions to this are some of the long speeches given to Medea which are quite remarkable for their expression of passionate torment and inner turmoil of a woman caught within the cruel and constrictive cage of male social order. The same can be said for the longer and heated exchanges between her and Jason at the centre of the short play. It seems that she has no choice but to be 'mad and bad' and pursue the terrible actions she commits - and that is the curious point of my title here - should we have sympathy with her and how much? Can we have much real sympathy for a mere human agent acting out the squabbling of the gods, Hera and Athena versus Zeus/Themis/Artemis? In short, why would we care? We are witnessing the actions of an instrument - an automaton as messenger of divine vengeance or will - is Medea in there? And if we can salvage some independent will can our sympathy therefore take us with her to the slaying of her own children as an act of feminist defiance?

If we remember from our last text and Apollonius Rhodius' background, in Book III of The Voyage of Argo, Hera and Aphrodite are wringing their hands over how they might aid Jason to get the Golden Fleece and hit upon the ruse of getting Aphrodite to send Cupid to loose an arrow into Medea and cause her to fall in love with Jason and therefore do anything to aid him in his quest, in some traditions, going as far as fratricide to do so. So already we have Medea acting under the influence as it were and not in control and therefore not wholly responsible for her actions. In Euripides play line 16 of the Nurses speech, 'now all is enmity, and love's bonds are diseased. For Jason, abandoning his own children and my mistress is bedding down in a royal match, having married the daughter of Creon, ruler of this land. Poor Medea, finding herself cast aside, calls loudly on his oaths, invokes the mighty assurance of his sworn right hand, and calls the gods to witness the unjust return she is getting from Jason.' And the Gods? Zeus will be her advocate as the Chorus states (l.148) and might Themis and lady Artemis are enjoined to see what Medea suffers.

We remember that Jason did not cut a particularly consistent figure as hero in the Voyage of Argo and at the expense of making him all too human, Apollonius arouses our slight misgivings about him, there not being something quite right, not 100% hero material about him, a whiff of inconsistency or even as if borne out in Euripides handling of Jason, one of inconstancy - or at the very least brutal male sexual realpolitik. For that reason we are not given to seeing Jason in a particularly warm light either. So where did the sympathies of the ancient audience lie? Is it useful to retrofit the play with such relatively modern confabulations such as feminist critique and paint Medea as a proto or in the words of some the first feminist figure in western literature? Is this the reason for the plays lasting popularity resonance and fascination throughout its modern reception? That may account for us, but I repeat; what on earth did the original audience make of this play? What was Euripides up to? Is Medea an example of the danger of barbarian wives, steeped in the mystery of the east (she is usually depicted in Eastern garb with potion mixing paraphernalia from a very early period) but lethal and prone to magic/poison when her wrath is stirred? Or is Medea, Euripides way of throwing a light on the unfair and constricting social conventions of (male dominated) Athenian society? It did come third after all so if anything there were reasons for it failing to receive first prize. What were they? Was there a great difference in quality between the first second and third prizes? Perhaps it was the shocking violence of the slayings in the play deviously schemed and ruthlessly carried out, albeit with a very momentary flicker of motherly remorse and hesitation. The play end quite as abruptly as it opens and it all feels a bit too slick almost 2 dimensional in plot terms - especially when compared with Sophocles Antigone for example. Much to discuss as usual!

Euge!
Posted by Saibancho at 09:05 No comments: