Ogygia! Ogygia! It’s only a model - or rather it’s an island, the island of Calypso, the immortal and sorceress daughter of the Titan Atlas who keeps Odysseus captive for seven years as her semi-reluctant boon companion and bedmate.
But where is it? This is a recurring problem with the place names in the Odyssey and I’m using Ogygia here as a symbol of that curious phenomenon. Lift up the name cover on a Homeric location and it could lead you halfway around the known and into the unknown reaches of the ancient Greek world. The connections are fascinating and bizarre..but leave us in the dark as to the precise whereabouts of these islands – perhaps deliberately so since we are trying to pin down legends and myths from as far back as the Greek dark ages. As is often the case, the links, dripping with mythical festoonery take us everywhere and nowhere. 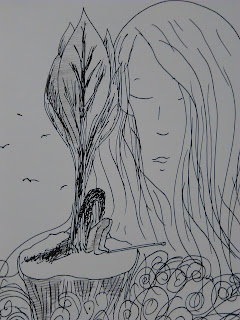 Ogygia has been connected with the mythical lost realm of Atlantis (remember Calypsos fathers name?). Scholars of the late Hellenistic or Alexandrian period such as Euhemerus (4th C BCE) and later endorsed in the comments of Callimachus identify the lsland of Ogygia with the Maltese island of Gozo. However, Aeschylus give the river Nile the epithet, Ogygian and Eustathius the Byzantine Grammarian gives Ogygia as the earliest known name for Egypt. Ogygia may have have some cognate link with Aegyptos but it is just as likely to be an over imaginative linguistic identification – seeing connections where the only evidence is a suggestion word or sound similarity – quite common in ancient Greek commentary (I’m thinking of some of the references in Plutarch’s Moralia here as Pausanias in his Guide to Greece). The description of the islands trees, thick and tall black cypress and the pungent aroma of cedar on the salt breeze, for me heralds distant echoes of Lebanon and scenes from the epic of Gilgamesh.
Bernard Knox, quoted in the Introduction to the Robert Fagles translation of The Odyssey states a clear position on all this – and I think I tend to concur. In the section The Western Seas, he describes Eratosthenes’ disdain of such fruitless enterprises – demonstrating that these attempts to place the Odyssey in a meaningful or reality based geography have been ridiculed since antiquity, not that it seems to stem the flow of countless new theories as to the possible real world identity of many of the islands and strange shores that our hero found himself washed up upon.
The wanderings of Odysseus are rather a topography of the soul,  the map of his changing fortunes, the places where the whim or ire of the gods may place us…the destinations are one of character or fate and the ways in which fate can be challenged and faced and ultimately overcome – though by means obscure and often uncertain. Odysseus is many wiled but is also many guised, hero, pirate, prisoner, escapee, hostage, guest, shipwreck – these then are the places he visits as a psychodramatic template overlaying the mysterious coordinates of the wine-dark sea – they are places inside himself and by extension places that exist in all of us as we navigate through the trials, joys and sufferings of existence.

Euge!
Posted by Saibancho at 07:43 No comments: