Salve!
Saturnalia is almost upon us, where boys nervously play for nuts at the risk of their buttocks, the cap wearing dice player looks over his shoulder for any swiftly approaching buffoon, intent upon throwing him in the nearest pond for a laugh, and the rod brandishing schoolmaster seeks in vain to control his particularly unruly class at this festive time.
At such times we could do worse than turn to the witty epigrams of Martial to provide the cheeky tocsin and mood music of ribaldry and outrageous bawdiness for such frivolous pursuits.
Martial (40 CE-104CE) like a couple of his famous near contemporaries hailed from Spain and after a standard Roman education in the provinces came to Rome in his early twenties to seek his fortune. He reminds me of Lucian in that despite a great eloquence and mastery of language, rather than follow a career at the bar or elsewhere, Martial decided to apply his verbal talents to the page and in particular the epigram – a brief, well-crafted witticism covering almost any subject, a person, object, occasion and gradually (if we believe his own trumpet blowing) making quite a name for himself. There are 12 books extant as well as other collections which don’t fall neatly into the finished epigram format – On Spectacles, Apophoreta, and Xenia. 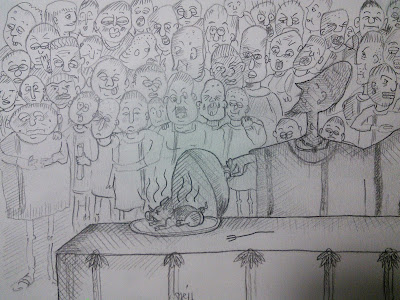 Martial tells us where his works can be bought and it appears from this that there did indeed seem to be a growing readership for his ribald verses and witty if rude character portraits – although he states that he never uses real names, it might have been possible for those in the know to read between the lines, unless some of the epigrams are mere exercises in ‘types’ rather than any particular individual. Reading through the books of epigrams, you get a variegated and rich picture of life in Rome from the angle of the client, constantly on the run to dinner of a rich patron to curry favour, perhaps get a decent bite to eat, perhaps even some money, following your patron to the baths, or assisting in his own legacy hunting or favour currying with even higher-ups..a veritable sweating pyramid of amicitia! There are shades of Juvenalian tropes, the simple rustic life versus the noisy crowded and expensive city, but Martial fares better as he withholds invective judgement and just gives us jewel-like visions of the odd, bizarre, amusing and disgusting aspects of Roman life at the time. He revels in the obscenity rather than rails moralistically at it.
For me the books appear to take us through Martial’s career arc (if they are in more or less chronological publishing order) and hence the title, it has been noted by many that the increasingly nauseating Imperial panegyric aimed at Domitian tend to cast a shade over his other work.  The Imperial bum licking epigrams are shouldered by an increased traditionalist tone, mere empty praise of gods or mythological figures, something which an earlier Martial would have steered away from as old hat in favour of some good old cock and cunt quips. The earlier books have a more anti-establishment air, a time before he came to the notice of a wider readership and thus the Imperial entourage and the emperor himself. Later on he appears to tone himself down and is finally content to turn out what amount to ready made to order, factory production line pieces: the Apophoreta have a list of random gift labels/fortune cookie-esque vibe, almost listlessly executed, like an experimental spare button box to be stored away and rummaged through later on a rainy day. Perhaps he ran out of steam and retired to the country – but finding the boondocks too quiet, returned to the capital for one last roll of the sheep’s knuckles.
Amongst the ribaldry and ribbing there are some genuine moments of pathos, a series of epigrams to Erotion. I am not sure whether he addresses the same Erotion in all the instances her name appears, from what we can glean from the texts themselves, she is a young girl who tragically died at the age of six (?) but the epigrams contain some very vivid element of pathos that strikes a contrast with Martials other work – which despite being very witty and punchy have a very canapé effect upon the poetic palate. The Erotion epigrams hint at other depths in Martial, hints that he could have turned his talent to works of higher literature.
But he preferred to carve out a career of two or three liners, possibly on a commission basis as his little collections sold more and more and he became more in demand and further under the Imperial radar and patronage, always the master of the bon mot, adept at turning out a well-wrought punchline for a staggering variety of situations – striking a very realist stance as he brings the vicissitudes and joys of Roman life vividly to life. The epigrams are like bright little gems whose glint has not faded even after the odd couple of millennia.
I look forward to assaying their brilliance when we next meet. In the meantime here is a list of some of the epigrams I particularly liked or found interesting for one reason or another.

Posted by Saibancho at 14:11 No comments: