Callimachus and Apollonius - The Short and Long of it

It seems that I have been overdoing the lentus in umbra a bit so I thought I would post a little by way of background to our next text reading of the Argonautica of Apollonius of Rhodes (born 295 BCE). Apollonius was a protege or erstwhile pupil to the Alexandrian scholar-poet Callimachus of Cyrene (born 310 BCE) the former being the younger presumably even though by all scholarly accounts Callimachus outlived his mentee and rival. Yes rivals for it seems that at first the two got on rather well but later became antagonists and even according to some traditions bitter enemies.

There are two strands to this rivalry or perhaps one with two branches, an artistic feud over whether short richly allusive poetic works (the sort we tend to associate the Hellenistic age with) were superior to the longer epic (in the vein of Homeric homage) type works, and a more personal level to and fro-ing based on the fact that Callimachus was passed over for promotion at the library of Alexandria when Ptolemy II Eugertes favoured Apollonius for the position of chief librarian. Its really difficult to judge how much of this is genuine history since our only real source of biographical information for both men apart from the odd snippet deduced from the fragments of poetry themselves (in Callimachus' case especially) comes from the Suda (Greek for Fortress or Stronghold), a 10th Century Byzantine encyclopedia of the ancient mediterranean world. 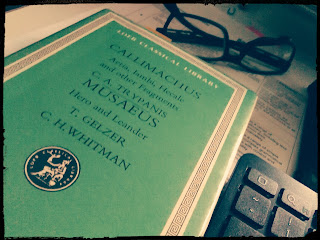 The information contained therein is culled from a variety of conflicting sources over a thousand years after the death of both men and so we should be careful not to take the embellishments too much at face value. The argument  for which they have come to symbolize or stand as representative poles, namely the chestnut of long versus short poetical works of the period, had been going on before their birth and continued to rage on through the remainder of the Hellenistic period (323-30 BCE).

I have been reading Callimachus' collected fragments, the Aetia (causes), Iambi, Hecale and others and despite the text coming across as having been through a shredder, peppered with lacunae and untranslatable segments it is often very interesting and makes for fascinating and upon occasion moving reading.The poetical feud seems in evidence from time to time as one reads through the fragmented remains and Callimachus does make the odd barbed comment against longer types of poetical works and by extension their authors.

In Aetia, Against the Telechines l.16-18 he states '...but poems are sweeter for being short (mellikroterai). Begone, you baneful race of jealousy! hereafter judge poetry by (the canons) of art, and not by the Persian chain.'

It is interesting to note that the Telechines was another name for the inhabitants of Crete, Rhodes, Sicyon, Ceos or Cyprus...all famed for beating out items from copper and for being mischievous sorcerers - Apollonius was known to have self exiled himself to Rhodes following a falling out with Callimachus so this could be a subtle side swipe at the younger poet as a 'hammerer' of his own poetry to form newer mongrel type genres.

Callimachean poetry is very rich in allusions and is doubly mysterious due to the fragmentary nature and the obscurity of the references. Callimachus loves to allude to myth wherever possible and where it isn't he just shoehorns one in anyway - probably in order to demonstrate his incredibly deep and detail mythological and poetic erudition. The meters add an extra dimension to his work and are highly complex and delicately intricate, bound up very cleverly with the theme of the individual poem - a good example of this would be the stichic archebouleion metre employed in the lyric poem The Deification of Arsinoé, the sister and wife of Ptolemy II Philadelphos who died in 270 BCE.

A diaresis comes after the third anapest, which is a line division that coincides with the end of a word, so that there is a trailing continuation of an extra couple of words at the end of a particular line, or a false ending feeling with something trailing after - this is used to striking effect in this poem since much of its rolling , flowing and speeding imagery is evocative of the dead queen's spirit flying up into the sky beyond the astral heights as it coils up from within the trailing smoke columns of her funeral pyre. This kind of poetry is so rich and complex on so many levels that it's clear that it could not really be sustained in the context of longer epic works. Perhaps this is why the two genres were considered to be poles apart and hence each had its ardent adherents and aggressive detractors - and also why the two men, for better or worse, came to be crystallised as its representative combatants.

It may also have been the view of many Alexandrian scholar-poets that, since it was impossible to outdo or even emulate the Homeric epics, they should rather seek out other poetic avenues of their own such as the intense and richly allusive lyric poetry of Callimachus. Paradoxically it is just as likely that the same conclusion had driven his pupil Apollonius in the opposite direction in an attempt to do something new with the Homeric epic format, in the process arguably creating one of the literary worlds' earliest quasi-novelistic treatments of mythological subject matter.

By all accounts Apollonius appears to have been the more successful (in some ways) in his poetic and creative reaction to the Homeric literary gauntlet and his epic work the Voyage of the Argo went on in later antiquity to inspire the Roman epic poets, Virgil and Lucan amongst others. Euge!
Posted by Saibancho at 11:27