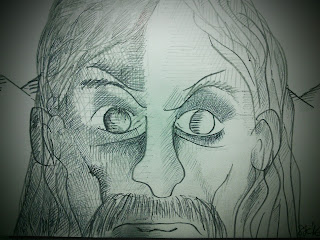 The culminating battle at Mons Graupius between the amassed remaining free tribes of the far North of Scotland and the Roman forces under Agricola brings the Agricola to a sharply defined conclusion.
Despite not marking the end of the text physically, all that comes after seems like an appendix or series of footnotes, a bit like the credits at the end of a film based on true events filling in on what the characters went on to do once the main story had ended. This is the end story of the conquest of Britannia and where the life of Agricola has its focus. Graupius is both a physical and metaphorical peak – the crowning event of Agricola’s stint as Governor and as Tacitus depicts it the high watermark of Roman conquest and expansion at its northernmost extent.
The two speeches run over sections 29 (end of) until 34 with the longer and more rhetorically developed of Calgacus first, followed by Agricola’s significantly shorter and more down-to-earth  even ‘realistic’ speech . Predictably, scholarship has fluctuated in its attitude to what’s going on with these two back to back pre-battle pep-talks and tend to pivot weathervane-like depending on the changing attitudes to empire, military expansion and conquest. It is possible to contrast the speeches in various ways – one would be to continue the theme of the exempla virtutis touched upon in my last post.
Could we look at the speeches as a rare case of a non-Roman, a Barbarian outside the zone of Imperial order acting nobly and with a moral high ground, especially in the light of Calgacus’ extended riff on the Romans as vicious marauders with unquenchable thirst for blood and riches under the thin veneer of civilisation? Another way of looking at this is Calgacus speech as purely a rhetorical device common to historical and epic where the noble enemy is made to seem as great and as noble as possible in order to render him/her/it as a suitable trophy worthy of its victor. It could be seen as Tacitus extolling the noble virtues and physical prowess of a wild beast before its slaughter, making it all the more glorious. Calgacus therefore rages most poetically in elegant Latin against the evils of empire, as only someone outside its zone of order would be permitted to do;-
‘Raptores orbis, postquam cuncta vastantibus defuere terrae, iam et mare scrutantur: si locuples hostis est, avari, si pauper, ambitiosi, quos non Oriens, non Occidens satiaverit: soli omnium opes atque inopiam pari adfectu concupiscent.  auferre trucidare rapere falsis nominibus imperium, atque ubi solitudinem faciunt pacem appellant.’  [Ag. 30.]
‘ (These)Plunderers of the world, the wide expanses of the whole earth having failed to meet their desires, now even ransack the ocean depths: rich enemies encourage their greed, poor ones their ambition, whom neither East nor West has managed to satisfy; unique among mankind they lust after want and riches equally. Plunder, butchery, rapine; to these they give the false name of Empire: they create a wasteland and call it ‘peace’. 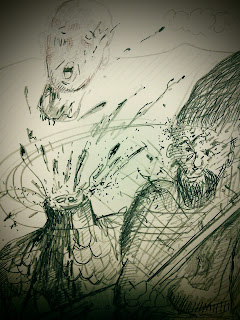 It’s classic Tacitus, language like a gladium, short stabs punching the damnation home with deadly accuracy and blunt almost brutal body blows. However in the mouth of a barbarian curiously permissible. For a Roman speaker to utter this diatribe would be unthinkable – so it’s defused by being uttered from an imagined place of chaos, a tribal chieftain outside of the realm of order. Scholars have tended to focus on this ‘permitted’ critique of empire from a barbarian point of view as an extension of rhetorical device. But perhaps there is something to be said for Tacitus’ own attitudes, since it is really his words not Calgacus’ that we are looking at. It’s very unlikely that such a speech was delivered in reality and in any case it would have been very difficult to reconstruct such a speech in a barbarian language – would anyone be that interested anyway after the defeat? Therefore surely we are looking at a permission for Tacitus to vent his ironic misgivings regarding the ‘benefits’ of empire and civilisation for those at the thin end of its world pillaging wedge. It is strange that there isn’t much about this amongst the articles on Agricola I could find – that is perhaps because most of it is firmly in the rhetorical device camp and because of the careful framing of the speech. That may be the case but the quoted section above seems a particularly strong critique going beyond the limits of mere literary embellishment. Is it a critique of Order or Chaos? Or both, being deliberately two-edged in its attack?
By contrast, Agricola’s speech is one of affectionate, fatherly encouragement to his troops – detailing the trials and tribulations they have all gone through together against Britain as foe collectively and individually as a chaotic force of rugged nature in the form of its forests, rivers and mountains. Chaotic nature has been tamed – what was previously unknown has become known to paraphrase that other well known world plunderer of more recent history.
Ergo egressi, ego veterum legatorum, vos priorum exercitum terminus, finem Britanniae non fama nec rumore, sed castris et armis tenemus: inventa Britannia et subacta.’ [Ag. 33.]
‘So we have outdone them, I previous governors, you the armies before you; today we have taken hold of Britain’s’ furthermost reaches not by rumour and hearsay, but with military camps and soldiers.’ 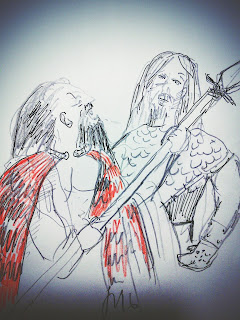 Tacitus through the exhortations of Agricola to his troops focuses on the practical the task of the soldier to pierce the unknown and subdue it and not think about the loftier ideals of civilisation. The work of the XXth Valeria Victrix legionary – his comrades in his unit and his leaders are what matters. These ideals are conspicuous by their relative absence – where Calgacus rails against the evils that empire wreaks on the world, focussing on its immorality, Agricola just tells his men – ‘focus on the job in hand – that of defeating a long hunted enemy and victory is yours. It’s a further irony that the men in the front line of the attack on Calgacus are not even Romans in the true sense – they are Batavian auxiliaries – already subdued to the Imperial war machine for the purpose of wiping out the last remnants of chaotic freedom in the form of the Caledonian tribes.
Is this speech meant to underline the image of Agricola as a virtuous man just doing his job – a noble and ideal military leader working to the best of his ability under a morally dubious regime? Or does Tacitus himself, even as he puts the stinging diatribe into the mouth of the noble barbarian Calgacus, inwardly albeit reluctantly accept that for all its evils, Imperium is the marginally lesser of the two evils of lawless chaos and civilised destruction with Agricola as its duped servant?
You decide!