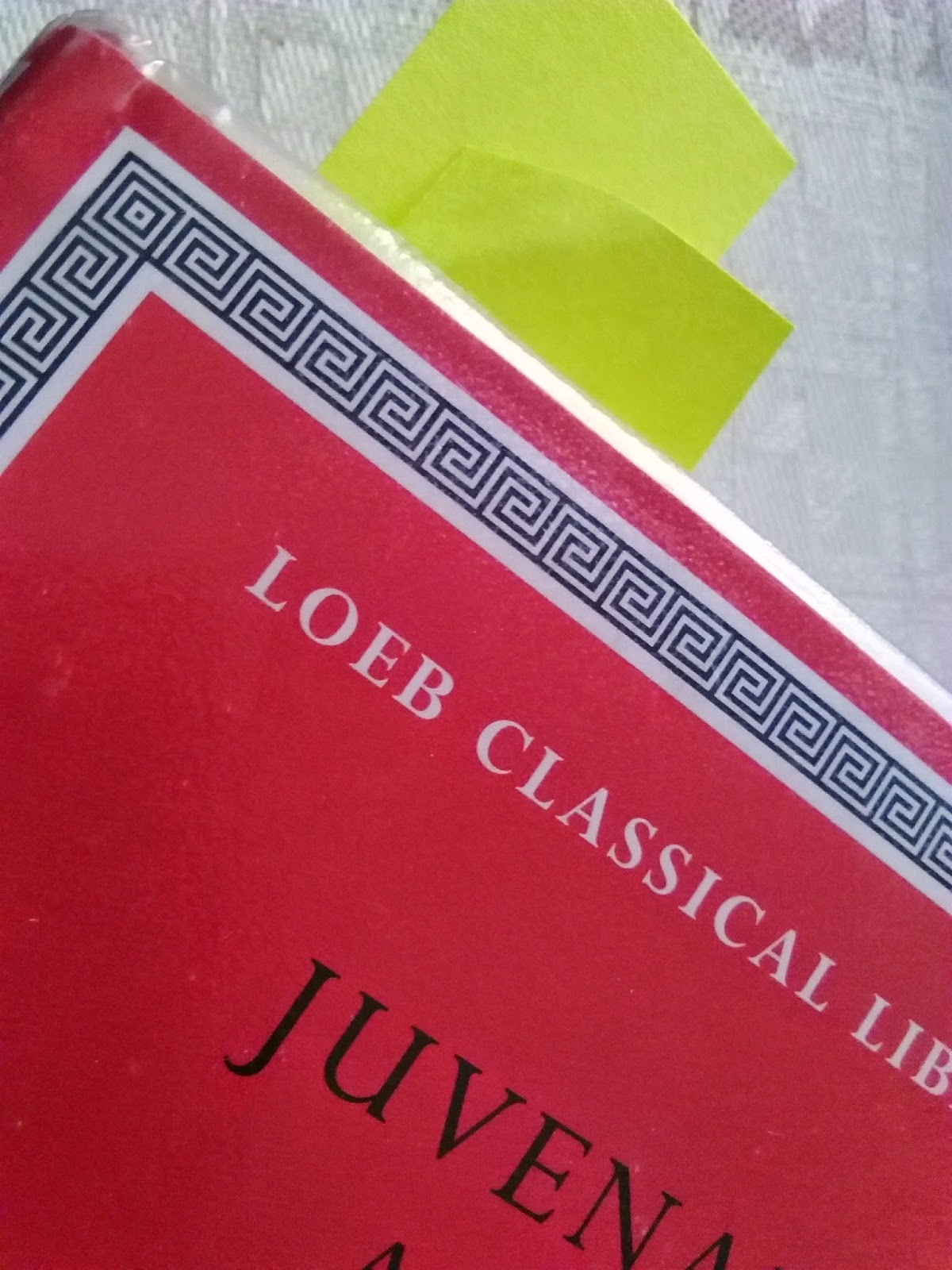 I got hold of the most recent Loeb translation of Juvenal and Persius translated and edited by Susanna Morton Braund. For obvious reasons I cannot reproduce any of her actual translations for comparison but I note her preface addresses her reasons for a new translation and something of her modus operandi.
She observes that previous 20th Century translations, essentially the efforts of the ‘wild and lurid’ 1960s and 70s as she might have it that were in vogue at the time ‘seem very dated’ and indulge overmuch in ephemeral expressions. It is a difficulty not unique but certainly pronounced with Latin to reflect the effects that word order and its variation had on a Latin reader when translating into English. She has also tried to render the text as natural as possible to our ears by removing connective words between clauses (nam, enim etc). The intended effect is that of robust fidelity to the original Latin and a decent and serviceable translation that will stand the test of at least a few generations, if not more.

All well and good...but what of John Dryden (1631-1700)? His style seems very fast and loose on the whole but at times his renderings to seem to crack through and expose a vein of Juvenal that no mere scholar can hope to unleash. Perhaps it is the advantage that the poet has – a supreme artist with words and an innate understanding of the lifeblood of the text rather than its accurate rendering into another language.

I would not go so far as to say that Dryden has created another version of Juvenal but there are flashes, turns of phrase which somehow make the plainer more accurate translations fall flat. I am always torn between the two poles since I imagine that the effect on me of Dryden at his best must surely come close to hearing the work as it was intended to astound in its original language from the perspective of a native speaker of ancient Latin – one which we will never have. Can Dryden and others bring us closer or are they taking us further away from the text? Or are both the necessary light and shade to any full rendering of ancient works? At the very least it’s a good reason to explore and rediscover how subsequent eras have tackled the Classical authors.

I will give a few of my favourite Drydian sections of each of the Satires we are going to deal with. I provide the Latin first and then Dryden’s splendiferous Restoration filigree. We shall have to wait until we meet to compare with Braund (2003), the latest offering on the Loeb slab. 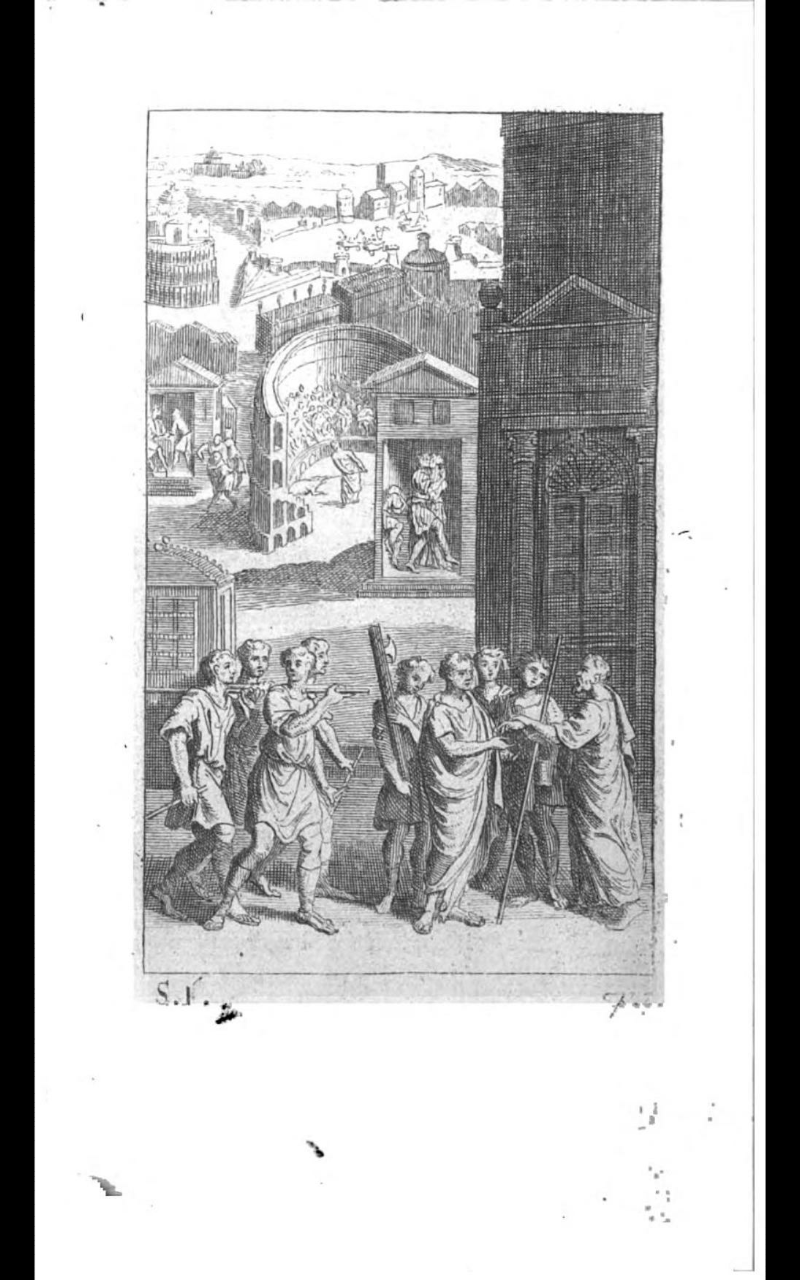 ‘When Sapless Eunuchs mount the Marriage-Bed,
When Mannish Mevia, that two-handed Whore,
Astride on Horse-back hunts the Tuscan Boar,
When all our Lords are by his wealth outvy’d,
Whose Razour on my callow beard was try’d;
When I behold the Spawn of conquered Nile,
Crispinus, both in Birth and Manners vile,
Pacing in Pomp, with Cloak of Tyrian Dye
Chang’d oft a-day for needless Luxury;
And finding oft occasion to be fan’d,
Ambitious to produce his Lady-Hand;
Charg’d with light Summer-rings his fingers sweat,
Unable to support a Gem of Weight;
Such fulsome Objects meeting everywhere,
‘Tis hard to write, but harder to forbear.’

‘And whom I most abhor: To speak my Mind, I hate, in Rome, a Grecian Town to find:
To see the scum of Greece transplanted here,
Receiv’d like Gods, is what I cannot bear.
Nor Greeks alone, but Syrians here abound,
Obscene Orontes diving underground,
Conveys his wealth to Tyber’s hungry shores,
And fattens Italy with foreign Whores;
Hither their crooked Harps and Customs come;
All find receipt in Hospitable Rome.
The barbarous Harlots crowd the public Place;
Go, Fools, and purchase an unclean Embrace;
The painted Mitre court, and the more painted Face.
Old Romulus and Father Mars look down,
Your Herdsman primitive, your homely Clown
Is turn’d a Beau in a loose tawdry Gown.
His once unkem’d and horrid Locks, behold
Stilling Sweet Oil: his Neck inchain’d with Gold:
Aping the Foreigners in ev’ry Dress;
Which, bought a greater Cost, becomes him less.
Mean time they wisely leave their Native Land,
From Sciyon, Samos, and from Alaband,
And Amydon, to Rome they swarm in Shoals:
So Sweet and easie is the Gain from Fools.
Poor Refugees at first, they purchase here:
And soon as Denizen’d, they domineer.
Grow to the Great, a flattering servile Rout:
Work themselves inward, and their Patrons out.
Quick-witted, Brazen fac’d, and with fluent Tongues,
Patient of Labours, and dissembling  Wrongs.
Riddle me this, and guess him if you can,
Who bears a Nation in a single Man?
A Cook, a Conjurer, a Rhetorician,
A Painter, Pedant, a Geometrician,
A Dancer on the Ropes, and a Physician.
All things the hungry Greek exactly knows:
And bid him go to Heav’n, to Heav’n he goes.’

‘Down go the Titles; and the Statue Crown’d, 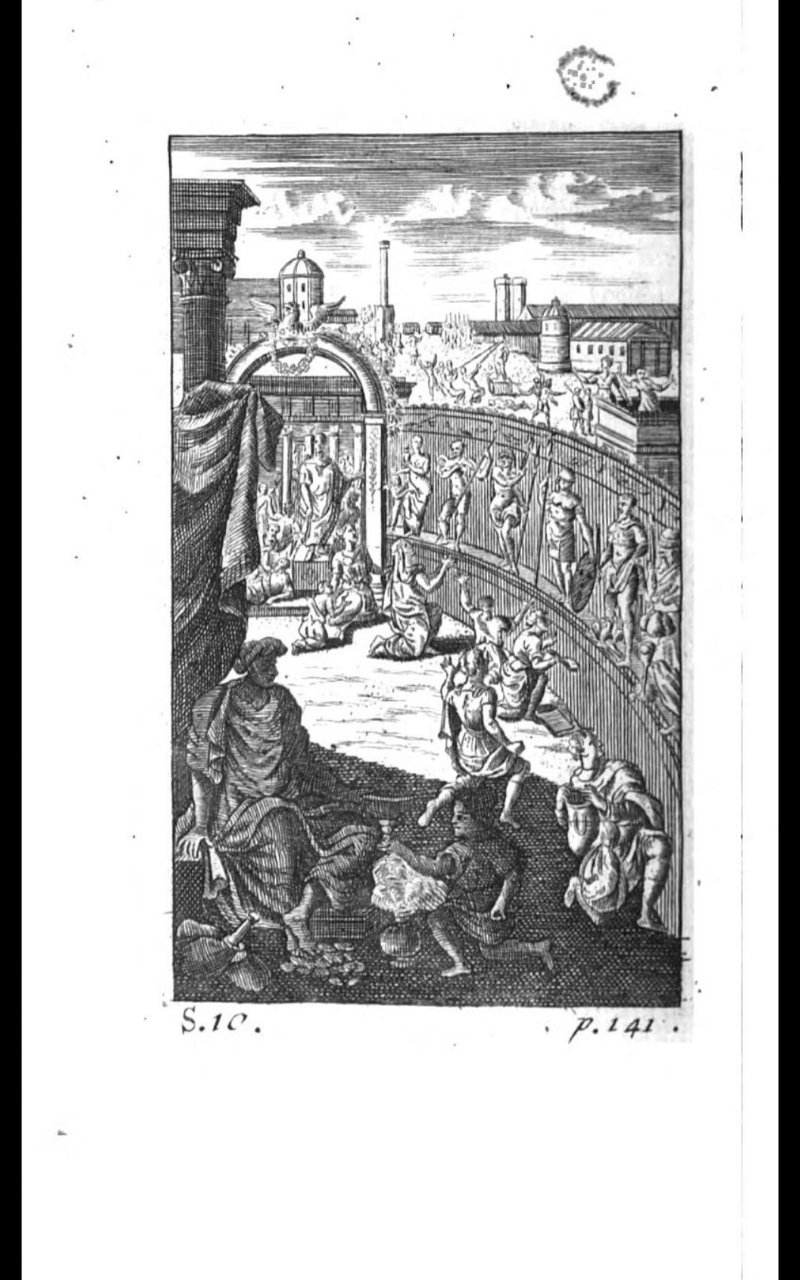 Is by base Hands in the next River drown’d.
The Guiltless Horses and the Chariot Wheel
The same Effects of Vulgar Fury feel:
The Smith prepares his Hammer for the Stroke,
While the Lung’d Bellows hissing Fire provoke;
Sejanus almost first of Roman Names,
The great Sejanus crackles in the Flames:
Form’d in the Forge, the Pliant Brass is laid
On Anvils; and of Head and Limbs are made,
Pans, Cans, and Pispots, a whole Kitchin Trade.
Adorn your Doors with Laurels; and a Bull,
Milk white and large, lead to the Capitol;
Sejanus with a Rope, is dragg’d along;
The Sport and Laughter of the giddy Throng!
Good Lord, they cry, what Ethiop Lips he has,
How foul a Snout, and what a hanging Face?
By Heav’n, I never cou’d endure his Sight;
But say, how came his monstrous Crimes to Light?
What is the Charge, and who the Evidence
(The Saviour of the Nation and the Prince?)
Nothing of this; but our old Cesar sent
A noisie Letter to His Paliament:
Nay Sirs, if Cesar writ, I ask no more,
He’s guilty; and the Question’s out of Door.’