I have been reading about the character of Ismene, sister of the more headstrong and defiant Antigone. She tends to get overlooked by a lot of critics as a weaker, compliant personality with limited force in the context of the tragedy, one of compromise with those in power, however unjust and cruel.

However in Jennet Kirkpatrick’s article ‘The Prudent Dissident: Unheroic Resistance in Sophocles’ Antigone’ (Review of Politics 73 (2011) 401-424), Ismene is given a deeper analysis as an effective passive resister, working within her perceived limitations, a woman as victim of the vicissitudes of war and the arbitrary violence of men. Sophocles play is unique also in the fact that there is a lot of dialogue between the two women. He has to work out how these two positions are to speak to each other since they are not as diametrically opposed as say Antigone and Creon – and for that reason the interplay is very subtle and nuanced. 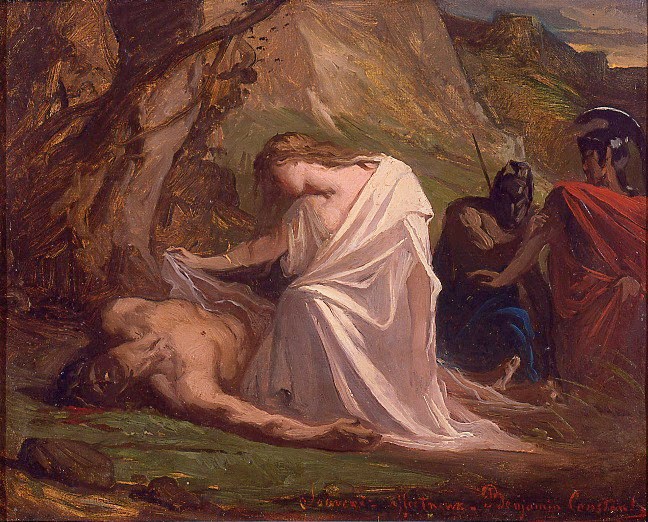 In some ways, like gravity, a weak but incredibly important force that enables life to continue even if (in the context of the Antigone) it should mean giving the appearance of obeying unjust tyranny and unjust decrees, Ismene acts as a symbol of the middle ground and of humans caught between the twin incompatibilities of wild and dangerous nature on one side and of the law (of men) on the other; phusis and nomos respectively.
Creon and Antigone are the irresistible force and immovable rocks of the play whose clashes lead to its ultimate tragic endgame – in the no-man’s land between them stands Ismene – much like the ancient Greek concept of the Protagorean man, at once weak and easily destroyed by the vagaries of nature and the gods but infinitely inventive and creative, able to harness the forces of nature to his/her will and create a safe haven in a constantly threatening cosmos. This theme is further elaborated in the chorus Odes in the play, in particular the Ode to Man (l.332-375) where man uses deceit to overcome the powerful.
‘With guile he overpowers the beast,


That roams the mountains by night as by day,


He yokes the hirsute neck of the stallion


And the undaunted Bull’


Creon refers to Ismene as a viper and implies that she is deceitful and not what she seems using subterfuge and plot in contrast with Antigone’s uncompromising and undisguised confrontation. It’s interesting to note that Ismene does not completely cave in to Creon and his unjust decree regarding the body of Polyneices and she cannot be viewed in black and white as a mere appeaser. She considers it a more prudent course to appear to appease but to engage in acts of subversion from this disguised position – to support her argument she reminds Antigone that as women in this violent men ruled world of Thebes this is their lot. Antigone will have none of this: (109-110) ‘ If you will talk like this I will loathe you, and you will be adjudged an enemy-justly –by the dead’s decision.’

Moreover, Ismene is hinted at as the person who may have buried Polyneices the first time, since it was a hasty surreptitious affair, just a sprinkling of dust, again in contrast to the second more defiant burial in full sight of Creon’s guards. It’s not clear cut who is the perpetrator of the first burial and Sophocles cleverly leaves it an open verdict providing space for ambiguity and scope for Ismene to represent more than a simple colluder or a weak spiritless woman.
Ismene can open our eyes to the layers of complexity of political thought in the play, how do the weak face power? Is political action limited to the powerful larger than life figures who hog the limelight? Is it wiser or more effective in the long run to confront injustice head on or rather to subvert from within? How far can an individual compromise and retain integrity? There is a much more subtle, grey area and ultimately modern political animal in the fascinating and low key figure of Ismene. Perhaps this why the play has proved to be so adaptable to form compelling and instructive mirrors to the political crises and impasses not only of the 20th Century with its clashes of -isms, but also to our own troubled age of heavily PR massaged regime changing superpowers.