Atom Heart Brothers – The founders of Epicurean Atomic Theory
The Brothers
One of the the key ideas of Epicurean Philosophy is that of the theory of atoms (‘physical theory’ Konstans 2003 (See Footnote 1.) describing matter as composed of finite but very small particles, which combine in multifarious ways to form the reality in which we find ourselves. 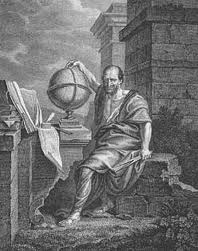 This theory was initially formulated by Democritus a Greek thinker working at the end of the 5th century BCE/first part of the 4th Century BCE, although I suppose we should mention that Democritus was probably inspired by a contemporary named Leucippus. The theory was quite influential and although not explicitly attributed to Democritus, it appears in the later works of both Plato and Aristotle. The latter thinker subjected atomism to the most rigorous and searching critique –resulting in several conundrums which are not fully addressed by Epicurus or his followers and so remain controversial. Lucretius does not add anything to the debate since he is merely expounding Epicurus dicta in poetical form rather than subjecting to any serious non-partisan critique.
Epicurus (341-271 or 270 BCE) further refined these atomic theories as well as introducing his famous ethical proposition as ‘pleasure as the highest good’, to an extent a moral extension of the materialist atomic theory. In addition to these two tranches (Physical, Moral or Ethical) there is a third, that of epistemology/perception. All three appear throughout the body of Lucretius’ work the De Rerum Natura (DRN for short when referred to hence).
The Theory
The atomic theory as initially hammered out by Democritus propounds the following:-
1. Atoms are particles of different shape and size.
2. They are infinite in number
3. They move freely in the Void until caught up in vortical currents.
4. These vortical currents and the atoms coagulate into ‘local cosmoi or universes’
5. The atoms in these local events form more regular patterns and give rise to such phenomena as gravity, matter etc.
6. Atoms have protruding hooks and cavities which enable them to create complex arrangements.
7. These complex coagulations can integrate and can also disintegrate but only back into their constituent atoms, no smaller. (atomos in Greek = a-(not) tom- (root meaning cut).
The problems
There were according to Aristotle, some serious problems with the theory (he deals with it in Book 6 of his Physics) and it seems that in reaction to this Epicurus refined the theory in several ways, such as giving the atoms the property of weight, whereas Democritus held that such properties came about as a result of the coagulative processes once the atoms had mixed in the vortical currents.
It seems to me that both thinkers (Democritus and later Epicurus) were trying to emphasize the immutability/inviolability of the atom as a unit. This explains another change that Epicurus made to the atoms in that he added the concept of minima, tiny particles not separate in themselves but which formed the hook parts in order to join the atoms together.
The underlying rationale for this sort of compromising is hard to understand since we just don’t have much of Epicurus’ original output in order to fully examine the reasons. Later thinkers continued to identify problems even with this refined theory, in particular Sextus Empiricus using Zeno’s Paradox to point out that a pair of minima approaching each other with no obstacles in between could not meet/combine if one assumed as Epicurus does that atoms and their minima move at a uniform velocity.
From all of this perhaps we can safely assume that the theory was on the whole speculative and used as a basis upon which to argue against Providence or any guiding principle in the universe and no afterlife, since all atoms disintegrated after a temporary coagulation.

This materialist atomic theory as applied to the early forms of life on earth; randomly appearing, collapsing, some survivng and others not on and on until the present day (from the ancient's viewpoint) could be described as a precursor to the theory of Natural Selection, although the theory lacks any concept of mutation to allow it be described as a true form of evolutionary theory.

Nonetheless, quite incredible ideas for such a long time ago. However there is a potential flaw here in that surely, if one accepts that such atomic events are truly random and endless, then at some point Gods or divine beings or fantastic creatures would arise. I suppose that these can be explained away by Epicurus as 'unstable coagulations' and examples of the lifeforms that, if they did exist at all in the earlier so-called Arcadian or Golden Age, did not survive to the present. But as to why they do not appear today remains unexplained....
No Gods?
On a bizarre endnote, Epicurus tells us that in such an atomic materialist universe, the gods still probably exist. Why should this be? It is never clearly explained in the theory and the reason for its inclusion in an overtly atheistic worldview remains quite obscure. Perhaps he felt that it was best to give them a bit part so as not to arouse the wrath of the thought police of the time? Or was he trying something later perfected by Lucretius in DRN , that of ‘honeying the cup of wormwood ‘and throwing a reassuring sop to those who could not contemplate a universe devoid of divine beings.
[1] Shields: The Blackwell Guide to Ancient Philosophy (2003) Chapter on Epicurus by David Konstans p 237
Posted by Saibancho at 06:09