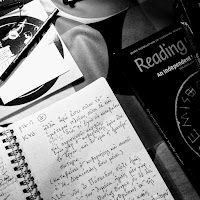 Its been a while but I thought I would try to keep things of one sort or another going to keep the Classics flame or even the Legendum flame going. I have decided to get back into my Greek with a view to regaining the ability to read texts with not too much difficulty and perhaps beyond that to more challenging dialects, Ionian, Homeric and so on. But first things first and in order to dust off the Greek cylinders and get them firing again I have chosen to work with the JACT Reading Greek series. I have just started on the Texts volume which is organized by themes or stories, the first of which is entitled The Insurance Scam.

I have done a few translations and the exercises in the companion Grammar and Exercises volume and so far everything rings a bell except for uncontracted and contracted forms - which is either something we weren't exposed to when doing Greek at school or were and I have forgotten it completely. It certainly came a s a surprise! There should be many more in store. I have vague memories of the Middle, Optative and/or Aorist if that is still what they are known as! It should be an interesting and illuminating ride.

I will also write out each text first before translating to get a good feel for the alphabet. The other thing this is good for is familiarizing myself with the various accents and diacritical marks, almost like pointing in Arabic which really do make a difference as to meaning (e.g. Imperatives and the 2nd person singular of Indicative tense). If any of you are interested in joining me on this journey let me know and we could perhaps swap notes or encourage each other when our stamina occasionally flags. I plan to do a bit each weekend so a relatively snail like pace and since I remember next to nothing of the grammar will probably linger over it. I will make further posts recording my progress from time to time.