We take a look this time at Sophocles ‘Aias, written in about 440 BCE,  during the so-called pentecontaetia, the fifty year period in Greece between the defeat of the Persians at Salamis and the lazy but menacing beginnings of revolt against the Delian League, rumbles around the Peloponnese which would later erupt in a full scale war between Athens and Sparta in 431 BCE. The Samian Revolt must have been a current topic on the lips of many - a real life story of revolt and capitulation in the face of Athenian might - and an event in which Sophocles himself as a general took a minor part. It is perhaps no mere coincidence that both Athena and Aias are tutelary figures for the Athenian state..perhaps signifying the constant struggle of the state versus the individual and the fault lines these struggles exposed and about which much of the ensuing Peloponnesian War was about.

There is an interstice through which we might catch a glimpse of the image that ancient Greek audiences would have had of Aias (Ajax in modern westernised spelling) - and that lies in the space between the depiction in Sophocles play of the hubristic locker-room jock throwing a murderous tantrum at losing what he assumes is rightfully his - the arms of the dead hero Achilles -and the differently nuanced accounts available to us in the Odyssey/Iliad and fragments of Pindar. The hero’s very name evokes the pain and suffering he undergoes as part of his god-decreed fate and he is fully aware of this himself as he groans aloud his own name and what it calls to mind: 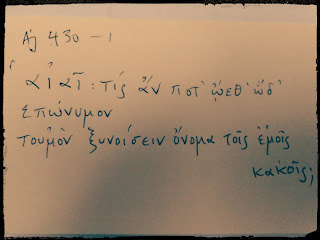 ‘Ai-ai! Who would have thought my name of Aias
Would suit so well, as namesake to my woes?’

This is a perfect example of why the ancient Greek text matters so much to an accurate dramatic interpretation of the play - I’ve seen recorded performances where this line is not clearly understood and the player merely ‘sings the name Ajax’. The reason lies in our westernisation of the name and so perhaps modern productions in English should try to give him back his original name of Aias. Without it the line is rendered meaningless or at best without its full force.

Sophocles’ Ajax has been looked at by some early scholars in terms of its ‘chiaroscuro’ effects - contrasts of light and shade (Stanford 1978) and while it's true that the light or the quasi mystical dawn variety of it does indeed play a symbolic role in Aias’ redemptive act of honour self-killing, there is a lot more going on in this comparatively short tragedy; the transition from the old Homeric world of freely acting highly individualistic heroes and the black and white code of honour by which they lived to that of the current age in which Sophocles audience found themselves of compromise, agreements and pacts with erstwhile enemies, difficult decisions in the grey zone of political dealings, a world represented by the wily, flexible deal broker, the past  master of persuasion Odysseus - a story of hubris and its concomitant downfall and punishment of the mighty human who dares to act without divine aid or sanction - the Derridean undecidable nature of the madness that grips Aias and the ensuing violence against the animal booty inside the camp precincts, unauthorised due to its location but authorised by divine madness and even the author itself brought into doubt - Athena or Aias as author of the act of transgression. 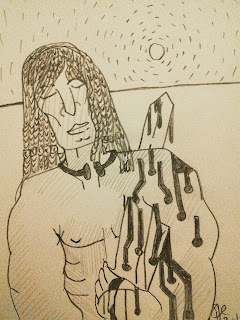 Athena’s role as author can be traced back to the competition for the arms of the dead Achilles, where she unfairly favours Odysseus over Aias, considered by the Trojan prisoners to be the obvious winning candidate due to his prowess on the battlefield and many cases of having saved the Achaean host during their retreat. She compounds this ‘authorship’ by deluding Aias into thinking he is killing the Atreidae by making him slaughter the camp livestock - resulting in his utter disgrace in front of his peers and the only way to preserve his honour by suicide.

The Iliad depicts Aias as a reliable and extremely doughty warrior, the ‘bulwark of the Achaeans and someone who time and again saves the day by stemming a full blown rout or reducing a devastating enemy onslaught to a bruising Trojan fallback. He is huge in stature and considered to be a genius in warcraft and a man of the highest reliability and integrity, his only clear fault being that of not relying on any god to aid him in battle. There is one exception where he is struck by the staff of Poseidon and his strength regenerated but as far as I remember, this is off the battlefield not during combat. It is an important point to note since this would seem to be the source of divine anger and the decision to punish Aias for his hubristic attitude to divine aid. It is not easy to trace the actual original or specific reason for Athenas hatred of Aias other than a wish to support her favoured mortal Odysseus at all costs and perhaps a general remit to punish human boasting and insolence and this brings me to another theory, one which I haven't seen out there but is perhaps still worth looking into.

There is the bizarre matter of not one but two, yes two Ajaxes (Ajaxi?) or Aiacades involved in the same Trojan conflict, normally distinguished by the epithets The Greater and the Lesser to avoid confusion. Moreover they have similar elements in their traditions and this is my I have a feeling that Sophocles may have blurred some of the Lesser onto the Greater - if we accept that we can see more of a reason for Athena's hatred since the Lesser raped Cassandra, and not just any old run of the mill rape but a rape inside a holy sanctuary..which is bad enough until you find out who’s bumper sticker is on the lintel..yes you guessed it..I Heart Athena. The lesser also takes part in a competition and is caused by Athena to stumble and lose the race to her favourite - sounds familiar doesn't it? There were indeed many variants available to Homer during the composition period of the Iliad and Odyssey (if we take him as the sole compositor or aggregator of the songs of Troy), there is even one of Ajax and Achilles engrossed in a dice game while the battle rages on around them, so it's not too far fetched an idea for Sophocles to have conflated elements of the two in order to create a more boastful and rebellious version of the mild mannered hulk in other traditions.

The play is also about Justice and how that might operate in society. It is clear that the contrasts between the uncompromising stance of Aias with that of Odysseus and Tecmessa with their impassioned and nuanced pleading highlight this - Ajax relying on a code of honour amongst a group of warriors led or rather commanded by the Lords Agamemnon and Menelaus - a system which clearly breaks down and allows for the individual to express his own idea of what is right (in Ajax's case - death with honour) - and Odysseus/Tecmessa appealing for the most reasonable outcome for all, including themselves, an appeal to compassion and pity based on compromising hard laws in order to reach a middle ground where everyone can get something. Aias is from a zero-sum world - you win or lose. If you lose and in this case lose face - there is only one option left and that it death in order to maintain integrity. When he recovers from madness this is his ‘seeing the light’ and reaching a sort of enlightenment and acceptance of his condition. Isn't his character also a very eloquent expression of the choice facing us all as we stand alone between the twin darknesses of being unborn and being dead forever? Here is Aias in his final speech eloquently summing up the nature of existence in line 633 (in some texts 646) 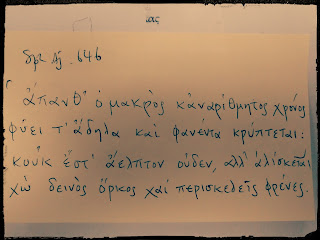 ‘All things obscure a long unmeasured time shews;
And, when shown, again conceals; nor is there
Aught free from capture. E’en the oath of Jove
Is captive made, and resolutions rigid.’

Ajax through his hubris, downfall, madness and final epiphany is to us a polished shield in which we can all dimly see our own existential predicament - that of the struggle of upholding our noble dreams and ideals in a sordid and limited world of suffering and compromises. The answer for Aias was death - for us who struggle on - it is to read his eloquent and fiery lines and to allow them to enter our hearts and thereby equip us with the means to live in the possession of our full integrity between the ‘twin darknesses’.