Tacitus - Agricola - The MSS and the SS 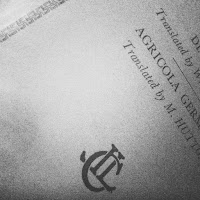 A copy of the text of the Agricola and Germania is winging its way to me via the Roman coastal fortress town of Crowborough as we speak and while it is I would like to share with you the curious story surrounding one of the Manuscripts of the minor works of Tacitus, the sole survivor of the Renaissance treasures rediscovered in the early years of the 20th Century. The manuscript in question is the Codex Aesinas Latinus 8 (E).
Until its discovery in 1902 in the private library collection of Count Aurelio Gugliemi Balleani of Jesi, there were only two other MSS which were the source of the Agricola text, namely Vatican Lat. 3429 or ‘A’, and Vatican Lat. 4498 or ‘B’ both of which were assumed to be of common ancestry deriving from a now lost Renaissance copy or copies. With the emergence of Codex Aesinas Latinus 8 (E), scholars soon came to the conclusion that this recent addition to the MSS extant, containing folios from the 10th Century could very well be the archetype of the Vatican and other MSS. It’s certainly the closest we have to the original text as imagined by Tacitus himself pace the usual scribal errors. 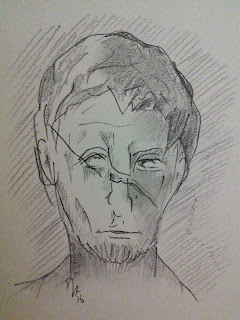 The codex was thought to have been lost in the intervening years after its initial discovery but resurfaced in 1980 in the collection of Count Arelio’s great nephew, Count Balleschi-Balleani. It was on loan to the Biblioteca Nazionale in Florence and later sold to the Biblioteca Nazionale in Rome and it now listed as Cod.Vitt.Em. 1631.
The curious story I alluded to is recounted in the excellent blog pages of Roger Pearse, whose interest seems to be patristics and related MSS but he covers a wealth of other areas mostly related to classical and late antiquity. Rather than paraphrase and try to rehash what is already an excellent piece of research work, I thought I would direct you to the relevant pages for you to read yourself. You can find the entry relating to the curious tale here and while you are at it please visit Roger Pearse's blog too, its well worth a visit. I hope to pick up the text of the Agricola in a couple of days and so should be posting a few ideas for discussion in the near future. In the meantime I give you this entry in the way of an appetizer, a roasted lark in garum sauce for your delectation!