Trimalchio and the Domus Aurea

It has been suggested by some scholars (most Notably P.G. Walsh in the introduction to his 1997 OUP Translation of The Satyricon) that the figure of Trimalchio in Petronius’ Satyricon could be a parody of the Emperor Nero himself.
The figure of the ostentatious dinner host, a money grubbing freedman who came out good, a sort of bulbous and ageing Essex wide-boy dripping with gold and surrounded by tacky expensive trappings of the nouveau riche ‘arriviste’ into Roman high society, is most likely a composite figure comprising Petronius’ pet gripes with the mores of the day: the relatively recent but rapid rise of wealthy freedmen in the accelerating turbo capitalist frenzy of the early principate, the arrogant and overbearing dinner host with no real friends only paid hangers on and other sycophants who are willing to put up with his ignorant boorishness for the free food and wine, the cruel and arbitrary treatment of his slaves by a tyrannical and bullying master, the pretence to culture and learning (bungled references to poetry, mixture of high and vulgar entertainments) and a belief that by buying art a little bit of its cachet rubs off on the purchaser, the superstition and thoughts of mortality that succeed in undermining the hollow superiority of the arrogant rich. Plus ça change indeed.
One cannot be sure exactly how much of Nero is in this picture but as chief ‘wit-meister’ and party arranger, Petronius would no doubt have been given some free license to send up even the Emperor himself...within limits. Even for Petronius with his pristine intellect and imagination it must have been quite a delicate high wire act. How much could you lampoon an Emperor like Nero and get away with it? Perhaps in the end he didn’t, and he committed suicide for reasons unrelated the machinations of his arch rival Tigellinus. A joke might have gone too far or a characterisation that hit a bit too close to the bone, might have caused Nero to tire or become murderously envious of his wit. Nero fancied himself as a performer and would brook only so much upstaging at his expense.

Perhaps with the figure of Trimalchio we have the social problems anthropomorphised rather than actual traces of the characters who personified this sort of behaviour. The host of the rather lurid banquet at the heart of the Satyricon is a curious figure over and above the obvious comedy. Is there a hidden symbolism in his name? Tri-malchio = Thrice King, or thrice Powerful, the ruler of the Underworld, the world of men and a god/daemon of the ether as well?  There were many three-in-one figures that abounded in mystery religions of the time, Hermes Trismegistus, the trinity theology of early Christianity had emerged from the same Mediterranean and gnostic melting pot of the times. Petronius is probably sending up superstition and cult practices here too.


Indeed he leaps off the page as a veritable but flawed Falstaffian King of Fools, a troubled master of ceremonies, lurching from faux camaraderie to violent threats at the drop of a jewelled wine cup. With Trimalchio, it’s a mixture of wild party and hall of judgement, where you could as easily receive a mention in his will, or be writing your own out in front of him.
Debauchery and brutality merge as the trembling chefs lustily hack open the dishes in front of the wine sodden crowd, offering up choice titbits from among the freshly roasted offal that has slopped out from the steaming supine carcass…animal of course but you can’t help thinking that it could be you on the platter at Trimalchio’s merest sozzled whim. Food as theatre.
All of which brings me to the location of the feast. Of course, the setting in the Satyricon is the luxurious if somewhat tacky villa of the rich freedman himself – but what of the literary or symbolic location, the location/s in the minds of the readers?  Could there be any parallel suggested with the Domus Aurea of Nero? After all, part of his legacy is Emperor as party animal sans pareil and this building project had the primary aim of entertainment – all night debauchery no less.
The dates of construction of this mighty pleasure complex the Neronian rus in urbem must be placed somewhere between the great fire of Rome in 64 CE and Nero’s suicide on 68 CE, so it’s just possible that the Satyricon would have been making the rounds of elite Roman libraries at this time, if we accept Walsh’s dates of composition for somewhere around 65 CE. 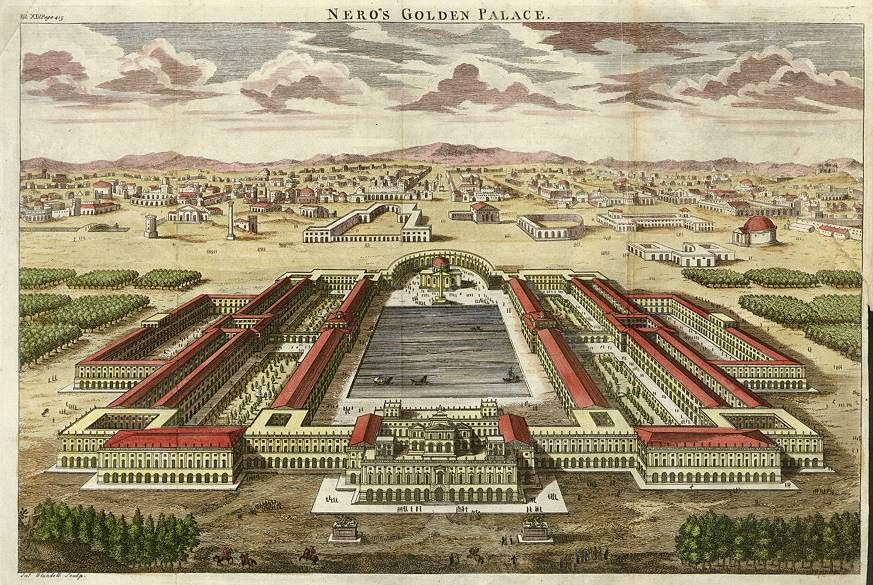 The Domus Aurea was located in regione III Isis et Serapis at the heart of the city on the smoking ruins of the aristocratic houses destroyed in the fire on the Palatine Hill and near the Esquiline near the site of the future Coliseum. It is suggested by some scholars that the building and grounds covered an area of about 1.2 square kilometres. The extensive complex of domed halls and hidden niches were awash with expensive white marble, ivory rendering and inlaid precious stones as well as copious amounts of gold leaf (hence the name the building quickly came to be known by). There were several innovations, mosaics were set into the ceilings, concrete was used more ambitiously to render arches and the curving domed ceilings and there was a rotating ceiling in the central dome operated by slaves. The moving ceiling had stars and other celestial images painted upon it to imitate the moving heavens to amaze the revellers far below. It must have been quite a sight – enough to make Trimalchio gape skywards and drop his half eaten boar’s foreleg.
There are many similar features described on a smaller scale in Trimalchio’s house, the frescos, inlays, the trick collapsing ceiling. For me this is a parody mirror-image of the great pleasure palace itself. I can almost imagine, Petronius giving a private reading of his work at the Domus Aureum so that the guests could laugh at the humorous contrast between the truly godlike decorations they were surrounded by and the paltry pretentious fare on display at Trimalchio’s cena. This would have been satire in the role of disguised and witty praise by comparison; in effect the same sort of thing Seneca would have been trying to do by his careful political scriptwriting for the young emperor; to show Nero in the best possible light even if it was through the tricky medium of praising by faint damnatio! Finally the wine soaked guests would have been showered by rose petals –one guest is even rumoured to have choked to death under their sheer number – an image that could easily have come from the Satyricon’s pages of excess and grotesquery.
Salve!
Posted by Saibancho at 22:56