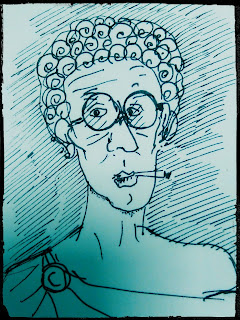 Xaire! Our attention now turns to Lucian of Samosata (c. 120 – 180CE), failed sculptor’s assistant, turned rhetorician, finally satirist and if we accept the outraged judgement of retired Royal Artillery Officer Henry William Lovett Hime in his 1900 monograph’ Lucian- The Syrian Satirist’, an amoral thug, who enjoys nothing better than uncalled for a repeated literary kicking of the Gods and Heroes of antiquity.
A search for biographical detail (scarce at the best of times for Lucian) trawled up Hime's work as well as the French scholar Professor Maurice Croisset (Essai sur la vie et les oeuvres de Lucien, 1882) which I am still reading, but since Hime often quotes the French scholar favourably it seems appropriate to assume that he shares a lot of the moral outrage at Lucian's apparent unsportsmanlike approach to lampooning those characters and subjects which , at least to these two Edwardian/Late Victorian figures, were deemed sacrosanct and off limits. Is it a case of era sensitive moral outrage or do the critics have something useful to say upon artistic grounds? After all, Hime reminds us grace á Juvenal of the true aim of Satire (at least what was accepted as their benchmark author). And it's a quote by the way that could as easily vindicate as indict Lucian; a matter of rhetoric and perhaps of ironic apposition to the sui generis satirist.
'quidquid agunt homines, votum, timor, ira, voluptas, gaudia, discursus, nostri est farrago libelli'
[Juvenal 1/1:85-6]
Hime adds by way of clarification and probably a bit of classic setting up on the side as a prelude to his damning judgement later on of the Samosatan that satire is -
' the expression of amusement at folly or of disgust at vice. But this expression of ridicule or scorn is subject to two conditions: first, it must be conveyed in literary form (I presume that by the term 'literary', Hime means literary according to classical rules or the rules of his era);and secondly, when aimed at the unseemly it must possess some tincture of wit and humour. The grounds for these conditions are obvious. If literary form be absent, the expression of our contempt or derision degenerates into a sneer or a gibe. If humour and wit be wholly wanting in attacks upon vice, satire sinks into a sermon or invective.' [Hime, Lucian -The Syrian Satirist, Longmans, Green and Co, 1900]
But I'm getting ahead of myself here. Let’s continue to look through the Himian lens as it were but start at the beginning where we get some details of Lucian's life and background to the works before all the moral outrage stuff pours over his head from the Edwardian military heights.
Hime arranges his monograph into five sections covering Lucian’s life, a classification of Lucian’s works, a section he titles the limits of satire (containing his moral objections to Lucian sticking the boot in to no useful purpose), and ends with sections on Lucian’s take on philosophy and religious views and some other characteristics arising from the extant works attributable to Lucian.
As far as I can tell, not much has happened in a 100 years regarding the general biographical details for Lucian, since outside the texts themselves not a lot of information is available. Philostratus’ Lives of the Sophists is one of the only sources apart from a couple of brief mentions in other works and fragments and so we can assume that Hime's outline is about the best we can do.
Lucian was born around 120/5 CE and died while serving in an Imperial official post in Egypt around 180 CE (recently revised by some scholars to 200 CE).
Lucian left school in around 140 and was apprenticed to his maternal uncle to learn the trade of sculpting images – possibly masks or ornaments but was soon kicked out for incompetence or being otherwise unsuited to the trade. He then makes his way to Ionia which during his time of the Second Sophistic (a literary-historico term to describe Greek writers from the reign of Nero up until about 230 CE) was the Las Vegas for the rhetoricians of the day. Even in his youth Lucian would have been exposed to the stars of rhetoric both past and present through his basic education, and we can imagine he was already a little bookish, precocious and fired up with wanting to learn at the feet of the Ionian rock stars of the profession and perhaps make a name for himself. It appears however that he quickly realised the shortcomings of the rhetoricians and in his Rhetorical Precepts 15 describes the recipe of their success in the amphitheatres and other places they collected in to declaim. Their success for him relied upon:
‘ignorance coupled with impudence, boldness and effrontery. Leave modesty, fair play and a sense shame at home.’ 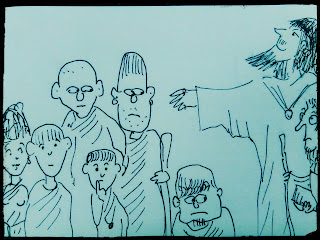 And furthermore:
‘Talk without ceasing say at haphazard whatever occurs to you…but whatever you do, don’t hesitate – talk on and on’
Lucian is in his mid to late twenties in 150 CE and after spending some time in Ionia observing the rhetoricians in action and possibly trying his hand at the profession himself for a couple of years, he moves on to other locations in Greece and then to Rome and on through northern Italy and into Gaul where he settles into an Imperial post and begins to make a comfortable living.
He later returns to Ionia and Samosata as ‘local boy made well’ and for a time turns to the rhetorician’s profession and was in Antioch around 162-3 CE at the time of the Emperor Lucius Verus. He leaves Antioch in 164 and returns to Greece, to sail from the Troad in the ambiguous company of the cynic Peregrinus Proteus (95-165 CE) to Corinth and then to the Olympic Games where Peregrinus very publicly self-immolated after a tepidly received farewell speech. In 165 CE, Lucian apparently gives up the profession of rhetoric (a waste of 15 years of his life in his own opinion) to concentrate on the writing of satire as serious project for his predominantly Greek audience. It is sometime after this that he takes up another Imperial posting in Egypt, possibly someone from his Gaul days had put in a good word for him and as a plus his native fluency in spoken and written Greek would certainly have made him very useful there ( in Alexandria and other major cities of the province). It might not be too fanciful to imagine him as a regular at the great library of Alexandria, mining its treasures in order to flesh out his increasingly popular satirical works
A number of Lucian’s works are both modelled on and a unique departure from the Menippean satirical style. We have touched upon Menippean Satire before when looking at the works of the Roman satirist Juvenal and should remember that this style is characterised by humorous attacks on mental attitudes as opposed to purely ad hominem invective directed at heroic or mythic entities; essentially, mythic parody or burlesque. Lucian takes the Menippean style into disturbing new territory by jettisoning the moral purport overt or implied of the original style and stripping it down to pure ad hominem invective. This is the essence of Hime’s disdain for Lucian, upon both  moral and artistic grounds. The satirist as mirror of society’s ills has become merely an amoral window into its further horror. The rod of moral instruction has become a tool of sadistic enjoyment, a clepsydristic orange redolent of verbal hypraviolence in the best written Greek of the time!
Thus Hime’s central issue with Lucian is one of morality pointing out that satire aimed as something which is not a vice (in the Juvenalian definition) such as religious belief constitutes a moral error and an artistic crime. He views this approach as ‘essentially destructive’, rather than constructive satirical criticism and not the mark of a true master.
By way of contrast ,Thomas More (of Utopia fame), although from a  very different era to Hime, displays a surprisingly enlightened attitude to Lucian in the preface addressed to Thomas Ruthall in his introductory apology to his translations: 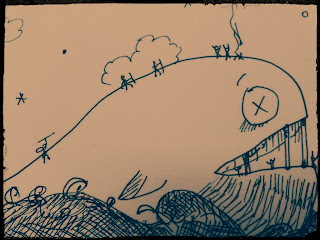 'If most learned sir, there was anyone who fulfilled the Horatian precept and combined delight with profit, I think Lucian certainly stood primus inter pares in this respect. Refraining both from the arrogant teachings of the philosophers and the more dissolute dallyings of the poets, he everywhere remarks and censures, with very honest and at the same time very amusing wit, the shortcomings of mortals. And this he does so cleverly and so effectively that although no one pricks more deeply, yet there is no one of impartial mind who would not allow his stings of sarcasm.' [More, Opera Omnia, 1689, pp.258ff]
The Horatian precept referred to by More is that of Horace's Ars Poetica 333-4, 'aut prodesse volunt aut delectae poetae aut simul et iucunda dicere vitae' Poets aim either to benefit,or to amuse or to utter words at once both pleasing and helpful to life.
Lucian was at least fair in his treatment and rather than single out the gods, mythic heroes, and the famous of the day, he was also a ‘hater and ridiculer of philosophical systems’. For example in other works such as Charon, we see Socrates throwing a wobbly at entering Hades fearing for his street cred. He is also notably dismissive of the Christians as gullible tools in the hands of charlatans like Peregrinus. For Hime this all boils down to Lucian being an ‘Oriental’ whatever that might mean in ancient terms and he considers such races incapable of developed rational thought being sharp enough at the details but hopeless at the bigger picture of philosophical or religious systems. Croisset tends to concur:
‘..il est vraiment frappe des details, mais il voit peu les ensembles..en literature, en religion, en philosophie, il eu sera de même; partout des observations excellentes, mais nulle synthèse.’ [Essai sur Lucian 101]
Perhaps these two scholars of the early 20th century were missing the point of Lucians style and Hime himself hints as much when he observes ‘one age may read without a smile what another age laughs at’. Could there be such a thing as Lucanian Satire, a dangerous step further beyond moral confines or at perhaps even a subtle sublimation or subversion of the moral codes so that they are present but in an ironic ‘presence by absence’, as employed by the more leftfield comedians of today such as Stewart Lee with his complex multi-faceted adversarial and self-conflicted style. I look forward to discussing the possibility of Lucian’s moral redemption with you soon.