Socrates in Love - the Symposium

Plato's Symposium marks a departure in both theme and structure from the exploration of the Socratic method of dialectics common to the previous dialogues. It comes as a particular surprise, albeit a very pleasant one, that Plato should write so extensively on the theme of love, such an unusual work coming from someone who would strictly limit or do away with poetry in his ideal image of a utopian Republic.

But perhaps its purpose is dual, not only to showcase some of the ideas and attitudes towards sexual love, male and otherwise in 5th Century Athens and in the process provide a vehicle to introduce a beginners module as it were to his pet Theory of Forms,  with the ever brilliant and engaging Socrates as posthumous spokesman, but also to create a personal and impassioned yet gentle homage to his greatest hero and to offer much by way of apology for one of the greatest thinkers the west has ever produced.

I feel compelled to say this because, more than any other work of his, the Symposium is replete with warmth, wit and humour as well as very touching scenes of loving friendship between males in company that make for a very endearing poignant and inspiring work, one that is still resonating with us today as a work of so many facets for so short a piece of writing. In this short work we go on a journey from bland and flat rhetoric to the very sublime heights of the purpose of life itself...against a backdrop of very human and life-like characters drinking and enjoying an evening of stimulating sublime conversation as well as some fine teasing and ribaldry in true Athenian, even Aristophanian fashion. There is much of the sublime and ridiculous in the work, both quite admirable qualities when expertly mixed in the wine bowl!

I was going to write in some detail about each of the speeches but I have decided in the interests of time and the approaching end of the year to refer in passing to our very stimulating discussion of them when we last met. The thing that strikes me in particular about this work is that it comes across strongly as Plato’s attempt to leave both an homage and an apology for Socrates and give the lie to his accusers picture of him as a corrupter of youth and one who was impious and worshipped other gods. Perhaps it was this endearing love of his hero that caused Plato to embark on such an unusually dramatic and vivid piece of writing in the first place. I can also recommend Benjamin Jowett’s (Master of Balliol and translator of the Dialogues of Plato in five volumes for the Oxford University Press 3rd Edition 1892) analysis and introduction to the Symposium, which although dated, is remarkable for its very even handed and almost prescient treatment of the issues throughout the dialogue.

I would also like to mention a couple of the things in the text itself that struck me as particularly interesting. One of these is the framing narrative at the start of the work where an unknown person has heard of the discourse in praise of love by Socrates at the celebratory dinner held in honour of Agathon and wanting to hear the account more accurately asks Apollodorus to recount it to him. 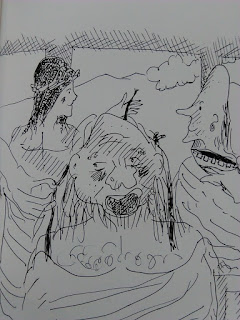 The story or rather action of the Symposium is buried Russian doll-like inside other times and the accounts and retellings of different voices at different times - it’s almost a precursor of the technique which features heavily in later masterpieces of narrative such as The Thousand and One Nights. Further hints at later Arab literary usage or at least inspiration arise from the concept of the lover and the beloved, in Pausanias’ speech and in Alcibiades speech on the effect of Socrates upon him and by extension all men fortunate enough to really hear what he is saying. I’m thinking of works of Sufi literature such as the Mantiq-ut-Tayr (c. 1177) of Attar of Nishapur in which several concepts of Platonic theory of Forms as applied to love and desire are mirrored and expanded upon. Another is the theme of role reversal, firstly in the passage dealing with Socrates and Diotima, possibly the most mysterious and fascinating of all of the sequences in the Symposium, where Socrates become the pupil who is subjected to his own dialectic method and found to know next to nothing about love and ripe for instruction at the feet of Diotima, seeress, wise woman and teacher of the ways of love.

Secondly where Alcibiades turns from the pursued, supremely confident in his sexual allure, and is transformed into the maddened pursuer, trying everything he can to get Socrates to have sex with him - finally realising that his would-be conquest is entirely on another plane, with a concept of love and the real love of wisdom that will hurl him into a deeper frenzy and eventually blow his mind altogether.

What Socrates offers is the higher love beyond all base or mere physical loves and the key to the mysteries of existence and the soul itself. Its Plato’s theory of Forms for sure, but no dry exegesis, rather a scintillating, radiant and maddening piece of inspiration which has reverberated down the years and across continents, its slim volume containing a bewildering array of ideas, expertly woven with some fine and heart-warming dramatic scenes, as vivid now as when they were first composed. After such an inspiring work where can we possibly go next? Homer must be the only answer!