The Good, the bad and the thoroughly disreputable: Xenephon's Anabasis Book II, Chapter 6.

The Good, the bad and the thoroughly disreputable: moral sketches of of Clearchus, Proxenus and Meno in Xenephons Anabasis 2.6

Eheu! We find a remarkable turn of events for the Greek mercenary force accompanying Cyrus the Younger in his attempt to overthrow his brother Atarxerxes and seize the throne. After assembling at Sardis and making their way through the citied plains and low hills of Phrygia (as described in Book 1) the combined Greek and barbarian mercenary force do battle at Cunaxa. It’s a very mixed result since although the Greek forces rout all before them, Cyrus is killed in battle following a rash attempt to personally kill Atarxerxes, rendering any victory hollow indeed.

The Greeks including our narrator Xenephon are now leaderless, without allies, surrounded by hostile forces in a strange and inhospitable land. During a truce meeting with the Persian forces set up by the perfidious Tissaphernes, the Greek generals are seized and later executed. Clearchus, the erstwhile leader of the expedition together with Proxenus and Meno are given short moralistic obituaries in chapter 6. It is interesting to look at how Xenephon holds them up to the glass of posterity and contrasts them with each other and by implication his previous account of the death of Cyrus. I looked at this chapter through the eyes of two translators, Edward Spelman (d.1767) and Robin Waterfield (2005) to see how they dealt with Xenephon’s Attic Greek – renowned for its lucidity and elegance. There is a similarity between the two translators in that they are both independent scholars and authors as opposed to institution attached academics. Spelman in particular seemed disdainful of the universty education of his day. But there the similarity ends, Spelman being a gentleman of leisure and of independent means due to his inherited seat and wealth, Waterfield a modern professional writer earning his living by his pen. Edward Gibbon the renowned historian thought Spelman’s translations to be the finest available in the English language at the time.

Here are the opening sentences of Book II Chapter 6, first Spelman and then Waterfield. 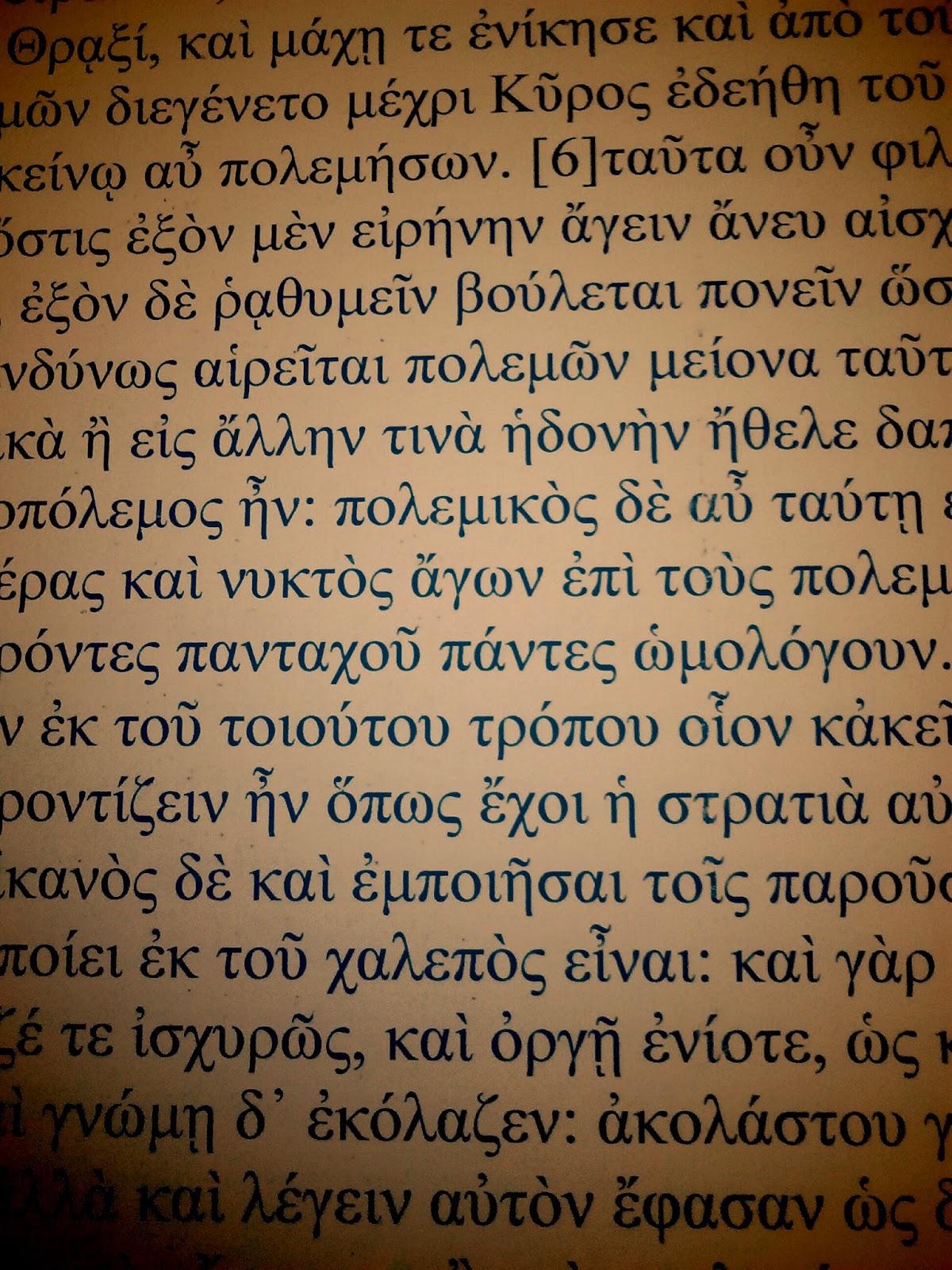 'The generals, being thus apprehended, were carried off to the king, by whose orders their heads were cut off. One of them, Clearchus, was allowed by all that knew him to have been a man both of a military genius, and one who delighted in war to the last degree; for, as long as the Lacedaemonians were at war with the Athenians, he continued in the service of his country; but after the peace he persuaded his fellow-citizens that the Thracians oppressed the Greeks; and having prevailed on the ephori, by some means or other, he set sail with a design to make war on the Thracians, who inhabit above the Chersonesus and Perinthus.'

'The Greek generals who were captured as described were taken to the king and beheaded. One of them, Clearchus, was universally held by those who knew him to have been not just good at warfare, but absolutely devoted to it. For example, he stayed around while the Spartans were at war with the Athenians, but after the peace treaty he presuaded his fellow citizens that Greeks were suffering at Thracian hands, and once he had managed to get his way with the ephors, he set sail to make war on the Thracians who live beyond the Chersonese and Perinthus.'

They are pretty close for translations seperated by hundreds of years which is remarkable. Spelman seems to stick quite close to the grammar of the Greek, for example where Clearchus is described in Waterfields translation as 'not just good at warfare but absolutely devoted to it', Spelman keeps the greek kai +adj -kai + adj construction ( aner KAI polemikos KAI philopolemos..') using the expression 'both =noun phrase - and + noun phrase.  Spelmans translation shows how much emphasis was placed on acccuracy or faithfulness to the original Greek. The result is that it sounds as though the text has a starched collar but nevertheless runs quite well. It doesnt come across as a literal translation but one where the underlying greek has a higher visibility. Waterfield has put more work into readability for the modern reader but skillfully making few if any sacrifices to the original sense. Its the lexis, the choice and order of words that depart from the original.
This is further illustrated by Spelmans decision to stay close to the Greek in the following line ' he persuaded his fellow citizens that the Thracians oppressed (Greek : adikousi) the Greeks, where Waterfield has coverted the tense to a past imperfect to emphasize the ongoing oppression and thus a sense of urgency in his appeal to the ephors, ' he persuaded his fellow citizens that the Greeks were suffering at Thracian hands'. Its reads well to the modern eye but there is a resulting slight remove from the Greek original text.

Xenephon had earlier given us a panegyric of Cyrus and the recently killed barbarian would-be king is depicted in on the whole glowing terms. Perhaps then these Greek mercenraries are held up by way of contrast, all the more striking since for each of the Greek (ie non-barbarian) generals, their good points are matched by bad and in the case of Proxenus and Meno the weight is firmly on the bad side of the scales.

A generation ago it would surely have been unthinkable to cast babarians in such a positive and contrasting light, but with Xenephon’s work we are in a new era, that of the professional mercenary and one in which age old loyalties to ones polis and Greek land have undergone severe strain and rupture due the chaos of the Pelopponesian War (431-404 BCE)

Clearchus is an efficient general but a harsh one, feared rather than loved by his men. This will set up a strong contrast when Xenephon emerges later in the anabasis as leader of the 10,000. The moral elements of a good leader are implied by his description of how the generals fall short of the ideal or go against them completely. Proxenus seemed to be out for fame at any cost and as a paying student of the sophist Gorgias of Leontini, Xenephon as a follower and erstwhile protoge of Socrates, underlines this general as morally challenged in his choice of instructor. As a result he is a general 'incapable of inspiring respect or fear, and stood in greater awe of his men than they of him' (Spelman 110). Menon is beyond the pale, as a man after riches, stooping to perjury, falsehood and deceit to attain them. He seemed to regard affection as foolish and would only feign such friendship as would enable him to deceive another. Almost in the nature of a moral payoff Xenephon informs us that Menon was not beheaded like the others but tortured for a year and then after much agony killed as a common malefactor. Here again Spelman keeps close to the Greek (poneros Greek: person of low worth, evildoer). Waterfield extends the contrast with the other generals and glosses this word as ' a man with no redeeming features' which seems to imply that the Persians considered him of insufficient rank or status to merit a swift and honorable decapitation.

Such is the fate of the generals leading to the crisis that forms the real beginning of the march of the ten thousand.
Posted by Saibancho at 08:46