Corruption in the Darkness - the transmission of early manuscripts of Juvenal

The Roman ancestor text went through about five stages.
In the first stage the archetype MS lost its tail (the text breaking off at 16.60...ut laeti phaleris omnes et torquibus, omnes). It is an error which is found in every MSS and since there is no evidence of any later commentary or scholia this seems to happened very early on in Rome and probably before the revival of interest in Juvenal alluded to before.
There is a second stage where a copy or copies (?) are made with the Oxford fragment still intact. Ausonius’ text is probably from this point in time and outside of Rome (the Gaul family). Stage three surprising enough is where the Oxford fragment disappears. It is possible here to deduct some more details about what the MSS might have looked like. The appearance would have taken a roll with twenty-nine lines per column with 6.O.1-29 occupying one column. The loss of the first 29 lines of the Oxford fragment was thus the loss of a page or a whole column. Other MSS such as Aurel. has two columns of 29 lines per page and so lend credence to this idea.
At the fourth stage the remaining lines of O 30-34 were redacted to three, but not before a copy with the five lines still intact was made since commentaries exist for the five lines where the corresponding text is absent from the work. Finally the last stage would have been the reshaping of the five verses of O 30-34 to the three verses of 6.346-48. the fragment makes little sense in its position and may have deliberately shortened due to the scribes doubts about its relevance or meaning.
At the end of this series of manglings, the text of Juvenal emerges in the 5th Century. the family of manuscripts divides into two main streams at this point: The P stream (with its relatives) and the Phi stream. The P stream seems to flow down through time with no further offshoots remaining relatively unchanged in its overall shape and contents but the Phi stream  became quite compromised over time as a result of the polluting effect of interpolation where scribes 'correct' what they saw as errors as well as cross contamonation where scribes may have been referring to several different copies in an aerly attempt to 'improve' on what they had befoe them. There are also various wildcard texts of the 5th and 6th Centuries which add to the chaos quite admirably. The result is that Phi stream is much less reliable that the P stream but that should not cause us to assume that the P stream MSS are corruption free as Houseman (1931) has observed.
So the upshot of all this is that the would be editor of Juvenal has to make a choice between a limited group of texts whih require some emendation and tidying (the P stream) and a larger repository of texts (the Phi stream) that have already been heavily edited and modified. In essence, it's a bit of a crap shoot with perhaps some safer ground in the P stream.
The revival of Juvenal surely helped his work survive into the Carolingian Renaissance. there are fragments of three late antique codices which give some albeit limited evidence for this :-
1. Ant.=Mertens-Pack 2925. Leuven Database of Ancient Books.
An early codex fragment found at Antinoe in Egypt which gves a tantalising idea of how far across the late antique world Juvenals appeal reached. Its a single leaf of a parchment document and from forensic orthograhical evidence apparently hailing from the same scriptorium in Byzantium that produced the Justinian Digests. The writing is in uncial which is commonly found in legal texts of the period (possibly a legal scribe fulfilling a clients special commission?) and dating to the early 500s CE. There are several generations of marginal notes in both Greek and Latin which perhaps indicates that the codex itself may have travelled about a bit in both literary directions.
2. Bob.=Vat.lat.5750,pp. 63-64, 77-78. LDAB 7374.
Dated to te early 500s CE, written in rustic capitals and therefore of probable Italian provenance. It is a rebinding of a single outer folio stripped from one quire of another book and compromises the end of the satires with the beginning lines of Persius which is a strong indication that already in the late antique period, the two satirists were being circulated together. the text came from the monastery at Bobbio and has survived by being lucky enough to have been used as a palimpsest for the letters of Galla Placidia and the Acts of the Synod of Chalcedon.
3. Ambr.=once at Milan, Biblioteca Ambrosiana, Cimelio MS 2 (now lost). LDAB 7653.
A single folio from a codex used to contain papyrus fragments (an ancient scapbook of sorts) written in half uncial. Its a rare hand and so could be interpreted as the work of a super nerd of the era...mainstram interest in the works having once again started to wane. 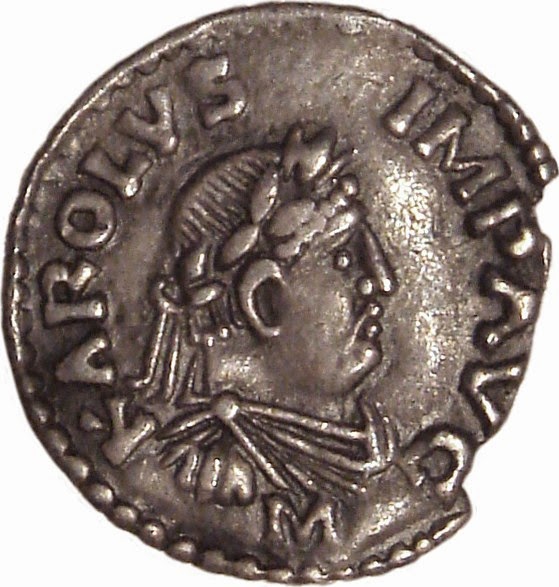 We know that Juvenal was part of Charlemagne's court library. The Irish founded monastery of Bobbio (as we noted above) had two books containing Juvenal (around the end of the 800s CE). the ancestry of these MSS can be more or less relaibly follwed as they survived the dark ages. from the common anceestor mentioned earlier (gamma) a generally quite accurate copy was made which led to a later version V and the family line eventually results in P manuscript, which Highet ((1954) 207) as the 'only complete manuscript which contains something close to what Juvenal actually wrote'.
The P family of mauscripts then are accepted as a very close version to the orignal state of the work soon after it left Juvenals' pen.
On the Phi side the important MSS are F,G,H,K,L,O,T,U and Z. From this mass group of interdependent texts there has been an attempt (Knoche 1940) to identify four families but it was not very successful considering the heavy intercontamination we have noted before. These Vulgate MSS are very confused and it is very difficult to create a a coherent or meaningful stemma. Its only real uuse is to act as a warning not to rely too much on the MSS of the P family and to bear it in mind when loking for clarification of other corrupt sections.
The MSS, redisovered in that later Middle Ages and the Renaissance formed the basis of the earliest printed texts and subsequent apparatus we have today.
Vale!
Posted by Saibancho at 03:47