I have been reading through the Herodotus using two translations and it’s interesting to compare the styles. The two translators, George Campbell Macaulay (1852-1915) and Aubrey De Sélincourt (1894-1962) are placed either side of the modern age – the end of the 19th and the early 20th Century. It struck me that these men might have put something of the times they lived in into the vision of Herodotus they created through their scholarship.


Macaulay was a Classical scholar and Fellow of Trinity College Cambridge in the 1880s and went on to be Assistant Master at Rugby School and after that an academic post at the University of Wales. In sum then, apart from a short sojourn on the continent, Macaulay passed a relatively uneventful life as a scholar and schoolmaster.
De Sélincourt was also a noted Classicist, winning a Classics scholarship to University College, Oxford in 1913. But De Selincourt, born in an era of political upheaval and conflict as well as incredible social and economic change, seems to have led a much more colourful and eventful life, serving in WW1 as a pilot and spending a period of the conflict as a POW. He retired in 1947 to focus on his writing and managed to publish a number of well received books on the Classics theme, most notably his The World of Herodotus. Here was a man who had experienced war first hand and tasted much of the turbulence of his times at very close quarters.
I have taken a few short extracts from Book VII, first the Greek (in alphabetic rendering in case you don’t have the fonts installed – I had a weird time doing this since it feels easier to read in the Greek and to transcribe was actually quite an odd thing to do, almost against instinct – it has an added difficulty that in alphabet one is forced to make choices which don’t always accurately reflect the original, still!), then Macaulay’s take on the section followed by De Sélincourt and finally some comparative notes. I will look at one set per post.
Here, we have the beginning of Book VII (aka Polymnia), 7.1.1, which tells of Darius' anger and increased desire to punish Greece for its crimes against his realm. 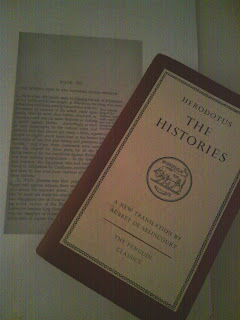 ‘Epei de angelie apiketo peri tes maches en Marathoni genomenes para Basilea Dareion to Hystareos, kai prin megalos kecharagmenon toisi Athenaioisi dia ten es Sardis esbolen, kai de kai tote polloi te deinotera epoiee kai mallon hormeto strateuesthai epi ten Hellada.’
Macaulay (1890):
‘Now when the report came to Dareios the son of Hystapes of the battle which was fought at Marathon, the king, who even before this had been greatly exasperated with the Athenians on account of the attack made upon  Sardis, then far more than before displayed indignation, and was far more desirous of making a march against Hellas.’
De Sélincourt (1954):


‘When the news of the battle of Marathon reached Darius, son of Hystaspes and king of Persia, his anger against Athens, already great enough on account of the assault on Sardis, burst out still more violently, and he was more than ever determined to make war on Greece.’


You can see immediately here that the Macaulay sounds a bit stiff to the modern ear and that De Selincourt has managed to tighten the prose up, losing nothing of the original but managing to give the section pace and impact.
In particular, compare ’the battle which was fought at Marathon’ , which is closer to the original Greek  ‘tes maches en Marathoni genomenes’, with ‘the battle of Marathon’ of De Selincourt. Already simpler, Leaner, tighter and losing that late Victorian archness. De Sélincourt introduces the more politically loaded term 'assault' for mere ‘attack’, the former word smacks of the trenches and one can almost sense a whiff of modernity entering the text.. Note too how De Selincourt has structured the phrases and put them together, with the assault on Sardis, the primary and original cause of the Persian’s king’s ire, right in the middle of the long sentence, chopped up and segued neatly into each other with minimum fuss. The phrasing itself has the lean verve of a military disciplined action.
With Macaulay’s initial opening with 'Now’ as well as such ornate terminology as ‘exasperated’ and ‘desirous’, surely we are in a pre-modern age where the theatre of world war has not yet imposed its urgency on words. It’s almost as if the 1954 version is bringing us the immediacy of a war council – sounding very familiar to us moderns. Whereas Macaulay’s treatment makes the passage seem like a noble and flowery legend, where battles were fought at a gentler pace with a certain delicacy. De Sélincourt prose seems to cut through all that and bring Herodotus into sharper focus and give it a modernist immediacy – an impossible feat to pull off before 1915 surely.
On the other hand the Macaulay still manages to retain a sense of what Herodotus must really have sounded like to his audience/readership. I have mentioned before the fact that Herodotus wrote in ( and most probably spoke in) Ionic Greek which has a certain archaism to it – maybe not as’ Elizabethan’ as Lucian would have it, but at least the effect that say, a lecture on the Iraq Conflict in the style of Edward Gibbon might have on us today.
In my next post I will look at some other sections.
Posted by Saibancho at 22:55