What’s going here then? I thought everyone loved Herodotus.


Of course we do because we are members of Legendum and by implication basically wild nutters about anything remotely Classics related. And yet here we have another of my favourite Classical authors, Plutarch (46-120 AD) apparently penning such poisonous absurdities as ‘The Malice of Herodotus’ as part of a collection of moral essays, no less. It creates the image of the ancient world equivalent of a member of the social elite asking (forgive me for paraphrasing the barrister in the famous Lady Chatterley Trial), “Would you let your house-slave read this book?!’ The question no doubt would have been a much more pertinent one if, gods forbid; your slave was an eastern barbarian. In short Herodotus was batting for the wrong side. In other words a philobarbaros – a lover of barbarians (non-Greeks).


It is clear that, although the historians after Herodotus (484-425 BC) were heavily indebted (some acknowledged others not so openly) to his pioneering work, there was a considerable amount of polemic aimed at the man himself and his historical method. Such was the reward for a historian who had practically lit the fuse of the new genre of local history in his sleep (well, after his death in fact!).


Ctesias of Cnidus (5thC BC) in his work Persica claimed to base his work on local native records and constantly contradicted Herodotus, calling him a ‘peddler of myths’. In the Hellenistic era, both Hecataeus of Abdera (4th C BC) and Manetho(3rd C BC) wrote histories as a counter to what they considered as false or misleading history concocted by their predecessor.


The critical pot shots (with the notable exceptions of the later Republic era figures of Dionysius of Halicarnassus 60BC-7AD, Cicero 106-43BC and Quintilian 35-100AD) were more or less constant right through antiquity, Plutarch being one of the more prominent detractors, and it isn’t until later in the Renaissance where the father of history starts to receive some remedial attention culminating in his re-enthronement today. It goes without saying that he is still subject to and worthy of further dissection and investigation but moral castigation?


The essay, addressed to Alexander (whether the Alexander, in a mock rhetorical exercise or an Alexander, a friend or colleague, Alexander of Cotyaeion (d.150AD) the philologist roughly contemporary with Plutarch, I have so far been unable to ascertain) is a tour de force of attacks upon Herodotus’ style, his faults as a historian and some ad hominem remarks arising from Plutarch’s fury at his history  for displaying an anti Corinthian, anti-Athenian and generally anti-Greek bias. Plutarch is not new to this kind of polemical essay as evidenced by his other works Adversus Colotem and De Stoicorum Rupugnantiis. It has been suggested that the form of the essay mimics the genre of judicial rhetoric and indeed legal terms do make their appearance (diabole, kategoreo, martureo etc) but this is common as an example of forensic language when ancient historians and commentators want to deal with their theme and make a case either for or against. But rather than a mere exercise in rhetoric, I do get the impression that the moralist means it in this instance - he would have been too emotionally involved and in the case of Corinth too partisan not to have been.


The De Malignitate as a whole is aware of Herodotus’ work as a unified and more or less linear narrative (albeit with switchback railways) and in structure follows the book in order. Its starts with notes on Book I (The Abduction of Io 865E-857A Hdt.1.1-5) through to the episode of the absence of the traitorous soldiers from some Hellenic allies at the battle of Plataea in Book IX (872F, Hdt.9.85). Strangely, there are no comments on Book IV.


He starts off as many professional hatchet jobs often do, with apparent praise of his target. Herodotus’’ Histories are described as being, ‘simple, free and easily suiting itself to its subject’ and the author as ‘an acute writer, his style is pleasant, there is a certain, force, and elegancy in his narrations’. But this is only to build the target up and come crashing down like a sack of olives on top of him:- Herodotus ‘ pretends to simplicity’ or is ‘really most malicious’ and we are told by Plutarch that ‘his other lies and fictions would have need of many books.’


Plutarch’s attitude to historians has a strong moral dimension informed by Plato’s ideas on education. His comment on the writing of history in his life of Cimon is noteworthy:


‘Since it is difficult, or rather perhaps impossible to display a man’s life as pure and blameless, we should fill out the truth to give a likeness where the good points lie, but regard the errors and follies with which emotion or political necessity sullies a career as deficiencies in some virtue rather than displays of viciousness, and therefore not make any special effort to draw attention to them in record. Our attitude should be one of modest shame on behalf of human nature, which never produces unmixed good or a character of undisputed excellence’ (Translation: Russell)


All this moral outrage reaches a crescendo around the midpoint of the essay and we can easily envisage the consummate essayist and Greek über patriot starting to foam at the mouth when he comes to the infamous episode of the 300 would be castration victims of the tyrant of Corinth, Periander, the city which, Plutarch tells us, Herodotus has ‘bespattered .. with a most filthy crime and most shameful calumny’. For Plutarch, this is not mere run of the mill shit stirring; it is nothing less than spraying the stuff all over the city walls! 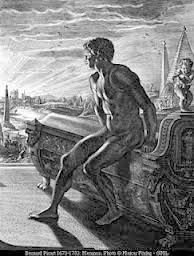 To give a brief synopsis the Corinthian tyrant Periander had sent 300 boys, sons to the leading men of Corcyra to King Alyattes to be gelded, the boys luckily ended up sailing first to the island Samos where the Samians gave them sanctuary and saved their skins…and presumably juvenile balls into the bargain. This apparently infuriated the Corinthians who accordingly as revenge decided to aid the Spartans in their later attack on the Samians. Plutarch takes any accusatory rumour involving a Greek city state as a personal slight. He is well known as a hyper patriot and there is nothing that lights his fuse more easily than a rumour or piece of hearsay relating to Greek double dealing, treachery or downright scummy behavior – unfortunately it’s just this kind of sordid microtale that Herdodotus loves to pepper his Histories with. It is the dirty diesel fuel that throbs deep down in the boiler room of the Herodotus’s text, motoring the macro level story along of how the East and West came to grips and how a bunch of disparate and paranoid Greek statelets put their differences aside (until 431 BC that is) and managed to pull off one of the greatest victories in world history, literally saving the Fifth Century Greek world.
It would take Thucydides to recount the sequel to this story of how this world, recently united against the Persian peril, proceeded to eviscerate itself over 27 years of bloody and confused internal conflict. Thucydides, a new breed of leaner and sharper political historian, could see how Herodotus may have foreshadowed the future with the seeds of all this through his strangely ambiguous and haphazard meandering investigations. But for Plutarch the seeds are definitely poisonous ones.


The great difference between the two writers is that Herodotus likes his history warts and all, spicy and ambiguous – and for me this makes his work that of an incredibly prescient and modern historian, constantly able to renew its urgency as a text and remind us of the dangers of the embedded approach which is more Plutarch’s line. You get the feeling that anything negative about Greeks or their heroes, regardless of whether or not it may be factually true – should never make it into the record. We still suffer from this suspect kind of history today (You might call it the curse of Kissinger) – you only have to look at any ‘official’ authorised US Military history of the 20th CVietnam/Indochina conflict to know the truth of that. If Herodotus, this ‘pleasant and cunning scoffer of a writer’ had been writing about the Cold War in the way that he does about the Persian Wars, he would definitely have been berated as ‘un-American’ and ‘off-message’. Plutarch is of course right to point out factual inaccuracies and by Zeus there are numerous instances in the Histories as well as a cornucopia of non-sequiturs, dead ends and other goofs, but for giving a more rounded account of events, with all of the mosaic-like reportage pro and anti, surely he is unfairly characterized as


‘he who has collected and recorded the fart of Amasis, the coming of the thief’s asses and the giving of bottles…cannot seem to have omitted these gallant acts and these remarkable sayings (of Leonidas) by negligence and oversight, but as bearing ill-will and being unjust to some.’


This for-and-against characteristic of Herodotus lends weight to another important overarching theme of his work, that of the moral dimension of deed and actors on the stage of history when faced with momentous choices and their own fate (often inescapable). The heroes and heroines (for let us note in passing that there are quite a number of active female figures throughout the history and barbarian at that!) come across as all the more authentic as a result and I would argue more rather than less moral. There are moments of cowardice, good and bad deeds in the same man or woman – all of human inconsistency and self-doubt is there in The Histories.


Plutarch makes the common error of many conservative patriots, confusing high morality with the public persona of his Greek heroes (the women are of course doing their duty at home!); offering us the essentially massaged heavily redacted version of character in contrast to Herodotus’ more compromised and thus more human figures. It is in fact Plutarch who encourages us into potential moral error should we paint too bright a picture of history’s victors. The embedded versus the independent historian has its roots in this battle between Plutarch and Herodotus (in its turn prefigured by the earlier debate in the Republic between philosophy and poetry or as Plato would describe it 'imitation') and still rages in academia today, not only about modern events but those of the ancient world as well. It still matters and so too does Herodotus for this very reason.

The moral essayist ends with his famous caveat which has come to stand as his signal red flag to those in danger of being seduced by Herodotus’ smooth style..’But as in roses we must be aware of the venomous insects called cantharides;so must we take heed of the calumnies and envy lying hidden under smooth and well couched phrases and expressions, lest we imprudently entertain absurd and false opinions of the most excellent and greatest cities and men of Greece.’


No ‘I –Heart-Herodotus’ T-Shirt for Plutarch then!


But I can’t let Plutarch have the last word and so we end this post with a quote from Book VII, Ch.152,


‘I am bound to tell what I am told, but not in every case to believe it’