I went to a conference last week at Painshill Park in Surrey called Gardens of Association about garden buildings in 18th Century landscape gardens. Painshill is a mid-18th Century pictorial circuit garden orientated around a central lake. It has a series of different buildings: a Gothic Temple, a ruined abbey, a Turkish Tent, a Mausoleum, a Gothic Tower, but most spectacularly a Crystal Grotto. The restoration of the Grotto has recently been completed, and the conference was partly a celebration of this. The second day of the conference included a presentation on the origins of Grottoes in 18th Century gardens and guess what, the origin is classical!

Wendy Monkhouse, a curator at the National Trust who was involved in the restoration, started her presentation by saying: "Homer is the foundation on which 18th Century Grotto making rests." So, first you have Calypso's Grotto and then the Cave of Polyphemus. The Emperor Tiberius had a huge grotto at Sperlonga in Italy which was formed in a vast natural cave. It was full of statues including this extraordinary one of Odysseus and his men blinding Polyphemus.

Apparently he used to entertain there and on one occasion rocks began to rain down on the guests. Most people ran for it, but Sejanus threw himself on top Tiberius which helped cement his position.

Equally important as an influence was Virgil's Aenied, in particular Dido's cave. There are several of these in gardens in the UK.

The conference ended with a visit to the Grotto and it is wonderful. It was made even more watery by the fact that it was pouring with rain at the time. Here are a couple of images. 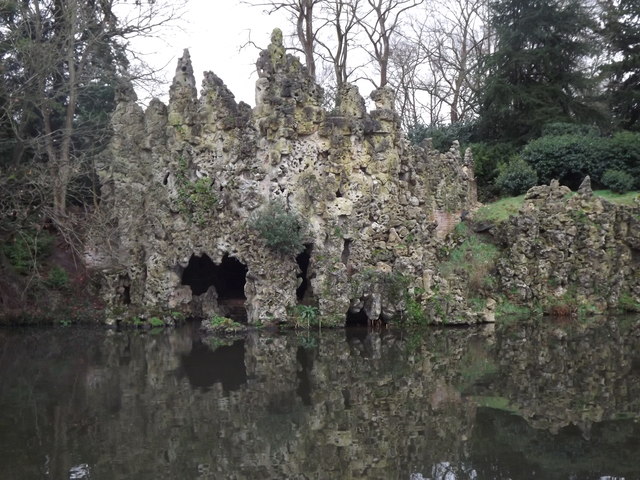 Well worth a visit (only don't leave at 5pm on a Friday as it takes forever to get back to Hastings)!