The Southern (Italian) Death Cults – yes, I am talking about Orphic Mysteries


Thurii crops up quite a bit in the reading I have been doing on Orphism and early mystery cults in the ancient Mediterranean. There were a number of excavations there and tombs dated to 300 B.C that contained votive leaves with inscription in Greek to Orpheus which the dead would presumably carry with them on their trip in to the underworld. Why Orpheus? Well, he is right there at the start of the earliest accounts of the mapping of the ancient Greek concept of the underworld as the first mortal to make it down there (and back)on a quest for Eurydice, his love, cruelly cut down in her prime by a poisonous snake bite. Some accounts have him as the original gazetteer of the place giving the names to the four rivers of Hell. 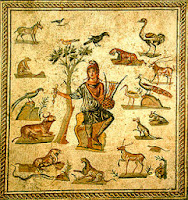 Orphic mystery cults where initiates either see or visit the underworld undergoing a salvation or transformation of some sort go back quite a way in Greece and the Greek colonies and apart from Orpheus there are the Eleusis Cults and Dionysian Cults with which Orpheus is closely linked and often identified with (via the death and resurrection myths of Dionysus). The roots are deep in proto-Greek religion and run throughout its latter development, influencing Greek tragedy (dromeon or performance as ritual) and cropping up in Greek literature and philosophy (Plato, Myth of Er in Book X of The Republic several dialogues, Aristophanes Frogs and others).


The classic Homeric underworld seems a pretty grim place from the earliest accounts, a place of judgement (Minos and Radamanthus et aliis), the other dead mere shades of their former selves, unable to enjoy the things of life, living on blood sacrifice from the odd passing Homeric hero (Odysseus). Under Orphic influence, whose rites saw the underworld as a place of wisdom and transformation and possibility of salvation always around the corner, the underworld becomes a more fleshed out and well..fun place to be.


The dead start having lives of their own, dwelling paces, sunny fields, decent food to eat, tools and possessions – in fact it becomes a mirror of the world above, looked at through the lens of Orphic eschatology as ‘the kuklos or the circle of existence – the ultimate goal of the fully initiated to escape the wheel entirely and be reborn as the god and return to the eternal void.


It’s here in the personal salvation aspect that Orpheus provides one of the strands available to the seeker of esoteric knowledge in the Mediterranean of the Hellenistic period and antiquity, the others being Gnosticism and Judean cults. In this crucible, Christianity, at first a rather obscure cult found an ideal breeding ground in which to hone its ideas, learn a bit from the many other esoteric/salvationist wisdom groups and creeds on offer and take advantage of the febrile zeitgeist of the 1st and 2nd Centuries and coupling that with already available existing networks of subterranean magical cults and mystery worshippers to finally adapt and thrive and ultimately take control of the spiritual reins of the pagan Roman Empire itself.


I don’t think that Ovid had much of this in mind when writing about Orpheus but was certainly aware of the many cultic practices and primitive rustic myths surrounding this Christ/Osiris like figure. Just how much Orphism/Gnosticism went into the making of early Christianity is a moot point, but certainly makes for a interesting debate.