Ch..ch...changes - Ovid and The Metamorphoses

The next meeting is set for October 6th, where we will be looking at the Orpheus and Eurydice section from the latter part of the work. I want to look a bit closer at Orpheus, the influence this figure had in the Classical religious sphere and the cults of Orphism so this will the subject of my next post. 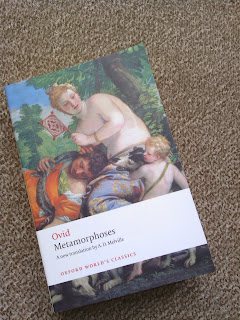 Ovid is an interesting poet to compare and contrast with Virgil and Lucretius, the two poets whose works we have encountered in our previous gatherings. Ovid seems incredibly musical and mellifluous almost to the point of delirium in his vivid and evocative imagery as he tries to encompass no less than the changing universe, its gods and heroes, 'of bodies changed to other forms from the beginnings of nature unto our modern age' depicting in his majestic sweep the constant flux and reflux of the fates and the beings both mortal and divine caught up in its prismatic torrents.

I slipped into the rather large bookshop in Piccadilly on the way home the other evening and treated myself to a newish translation of The Metamorphoses by A.D.Melville. So far it reads very well indeed. I am coming to the work quite fresh since it is not one I have ever really read extensively in the original (only the odd snippet) and consequently all seems to be new and vibrant..I don't know yet whether this is the newness of the work for me or the skill of the translator. I will need to look at the Latin to make a better judgement. I hope you are enjoying his whirlwind skills. Until the next post.