Somewhere between the 19th and 30th of April, C.E. 65, Seneca took the decision to end his life. By the accounts we have (Tacitus, positive, Dio Cassius less so) it was a drawn out affair apparently modelled on the last hours of Socrates. I think it best to hold judgement on whether this was a truly Stoic act or the act of a Roman, not always the same in my book, since it seemed to be a popular way of saving face or taking responsibility or removing oneself from an impossible situation, a huis clos. Had he gotten in too deep as an 'amici pottissimi?' 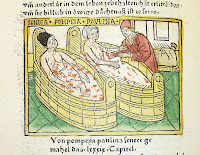 Seneca's last day could certainly fit any of the available scenarios and rationalisations. But like so much about him, there is more than meets the eye and the accounts that remain cannot be taken at face value. From the philosophical point of view, Stoicism has a range of attitudes and pronouncements on the philosopher taking his own life - a supreme and noble act arising from assenting to the will of divine reason. They range from, to our modern eyes at least, reasonably justifiable,  such as a debilitating illness which impairs the body and mind so much that one cannot properly function in a meaningful and dignified way..to the frankly bizarre and seemingly highly capricious...

Let us recall for example Zeno's end, taking his life after a fall in which he fractured his toe..exclaiming (presumably addressing the gods)..'Why do you call me?, I am coming'.

Seneca's case is further complicated by the fact that his own brand of stoicism is a mix of early and mid stoa and possibly even a few borrowings from Epicurus, although it must be said that the followers of the garden rarely advocated such a drastic act of self destruction, and there are strict requirements in early Stoa texts that only accept such an act where there is an imperative in tune with the divine reason and the actor is one who is fully enlightened and not an 'imperfectus'.

Through reading into the letters and some of the political world in which he was increasingly embroiled and as the reign of Nero spun out of control and the emperor increasingly gave in to his bizarre and cruel impulses, a more nuanced picture of Seneca emerges and I must admit an altogether more sympathetic one than I at first credited him with. A complex man - but above all things human and a man who wore the mantle of philosopher in good faith albeit lightly at times and replete with the compromises that high office must have brought.