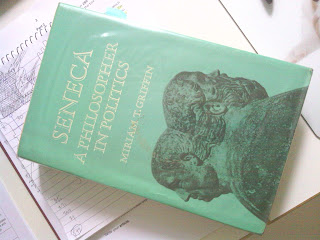 I have got my machete out and have started hacking my way into the thick amazonian jungles of 'Seneca- Philosopher in Politics'. Its definitely a tome aimed at hardcore classicists, since all the references to other works are left in the original and each page has its bottom third devoted to footnotes and other references to scholarly articles and publications. Nevertheless, eminently readable and fascinating despite the relative dearth of hard data on Seneca's life outside a few sources (Suetonius, Tacitus, Dio etc). The family name ANNAEUS seems to have originated in the eastern provinces (Illyricum) which indicates that Seneca was born and grew up in Spain in an educated family that themselves had immigrated into the country from the East and did well for themselves, his father being quite a name in Corduba and a scholar himself, spending much time in Rome in the pursuit of rhetoric and oratorical learning.

I am at the point where the meat of the book starts or the more substantial foliage, to continue the metaphorical imagery, where Griffin looks carefully at the advisory role and activities of Seneca after his recall from Claudian imposed exile (c.41-49 CE) in Corsica and according to Claudius' wife Agrippina's wishes (who engineered his pardon and recall from exile - so this tutor gig may well have been a payback thing) becomes tutor to the boy Nero  (Domitius), who assumed the toga virilis at the precocious age of thirteen.

I am still not sure at this point at what kind of man Seneca really was. Most scholars now are agreed that its really not wise to try to rely wholesale on his works, eloquent as they often are, to recreate the qualities and character of the actual man - something which may be lost to history but there still seems to be a new book or article out on him every year ever in pursuit of the face behind the legend.

I have this sort of nightmare in connection with this subject of time travelling into the far future (the year 3489 A.D.) where I overhear a couple of scholars discussing a 'great man of ancient belles lettres of the pre-fusion era 'Earopa' and wondering if they can reconstruct his character from his excellent writings..one fragment of which seems to describe his experiences in exile in a strange place which he calls a ' HMP Wormwood Scrubs'...the name of this ancient genius? Jeffrey Aaachear. Let that be a warning to those of us who wish to view these ancient genii through overly roseate lenses.

And on that thoroughly chilling note...let me remind you that unless I hear otherwise the list of letters stands as is!
Posted by Saibancho at 12:35